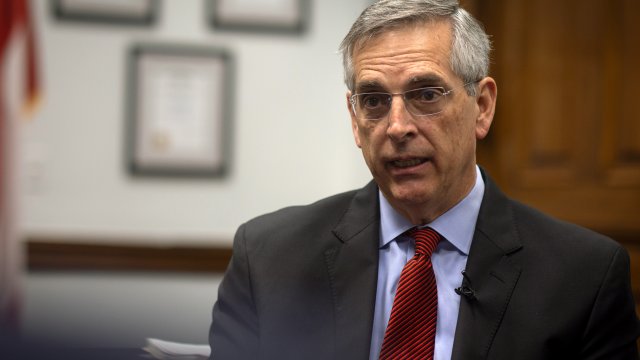 SMS
Georgia Secretary Of State Addresses Concerns Over Election Policies
By Chance Seales
By Chance Seales
November 23, 2021
Brad Raffensperger talks to Newsy after the last major lawsuit over Georgia's 2020 election was tossed out by a judge.
SHOW TRANSCRIPT

NEWSY'S CHANCE SEALES: The end of 2021 is fast approaching — but fights over the 2020 election are still playing out in court. Take a look at this headline from last month: "Georgia ballot inspection case dismissed after no fraud found." The lawsuit was filed by supporters of former President Donald Trump. They wanted an outside review of absentee ballots from Fulton County, Georgia, but investigators told the court there were no counterfeit ballots to be found. And the next day a judge tossed out their case. It was the last major lawsuit over Georgia's 2020 election. Remember, ballots were counted three times, including once by hand in a risk-limiting audit. Georgia Secretary of State Brad Raffensperger responded to the now-dismissed lawsuit. He tweeted, "Georgia's elections were accurate and secure, and the courts continue to affirm that fact." Let's bring in the man behind that tweet tonight for more insight. He's Georgia's secretary of state and author of the new book "Integrity Counts." Brad Raffensperger, thank you for joining me.

SEALES: Mr. Secretary, you call that recent election accurate and secure. But the state of Georgia's legislature tightened up rules. Some applied to your office, like not being able to send absentee ballots unless they are specifically requested by a voter or their loved one. If things were accurate and secure. What problems did the new voting law fix?

RAFFENSPERGER: Well No. 1, we moved away from signature match and migrated to the driver's license number with photo ID for identification for absentee ballot. That was really something that I think helps strengthen the system, strengthens confidence. We have been sued by both the Democrat Party and the Republican Party over signature match. They said it was subjective so we used driver's license number and your birthday — day, month, year. That's very similar to what they've been using in Minnesota for 10 years now.

SEALES: You lay out a few of the things that may be benefits, like being able to easily match an ID. But there are some drawbacks in the eyes of people who are opponents of this law — where drop off boxes are going to be, who has to be around them. If people can have, you know, water in line or something like that, give out gifts. Another big concern under the Georgia Election Integrity Act of 2021 is the state Election Board. I think you're an ex-officio member of that board, right?

SEALES: And so there are I believe four voting members. But under this new law they can suspend and then replace local election officials deemed negligent, malfeasant or nonfeasant — had to look that one up. I've never heard that word before. That worries a lot of people. This politicized outcome is possible with four people choosing the people who are going to be deciding elections. Should we worry?

RAFFENSPERGER: Well, first of all, there's a process in place. You have to have a review panel that consists of one Democrat Election Board member, a Republican Election Board member and our general counsel. They do a deep dive with a review panel so there's due process throughout that process. But if you look at what happened in Florida years ago, they had issues, both Broward County and Palm Beach County. Gov. Scott fired one of the election directors and then Gov. DeSantis fired another. You don't hear about those counties anymore. So now for the very first time, we have accountability measures that are in place. And this is really specifically, if you talk about Fulton County, the review panel right now, the AJC has been talking about Fulton County since 1993. That's nearly 30 years ago. It's high time that things improve in Fulton County. It's not just Fulton county residents, but the entire state of Georgia when over 10% of your voters live in one county.

SEALES: Mr. Secretary, You were put through the wringer, your family's put through the wringer. President Trump hates you, he says, pretty much. You know, Republicans in Georgia seemed to turn on you. There was this one political article that stuck with me. The headline said: "He's toast." I don't know if you saw that article, but that's how a lot of people felt. Why do you want this job again?

RAFFENSPERGER: Well I've shown I'm one of the few people, if not the only person that will stand in the gap and make sure that we have honest and fair elections in Georgia. I'll make sure that we have continuity in this office. And I'll make sure that we're going to continue to improve the process for all voters. So now we have an accountability measure to keep lines shorter than one hour, and we'll be implementing that to make sure that voters have a great voting experience, lines are less than one hour. And our office does a lot more than just elections. We're now undergoing reform of licensing so we can streamline that process. We already have worked hard on the securities and charity side of things.

SEALES: Well, it's going to be tough. I mean, you have Marjorie Taylor Greene out there saying at the rally for Trump that Trump actually won things. You have former President Trump saying he'd almost like Stacey Abrams more than having Brian Kemp again in the governor's seat. Yet you're not ruling out voting for Trump if he runs in 2024. Do I understand that?

RAFFENSPERGER: First of all, my Republican friends need to understand that 28,000 Georgians skipped the presidential ballot and yet voted down-ballot, and in the Republican congressional areas such as Marjorie Taylor Greene's areas, they all received 33,000 more votes cumulatively than President Trump did. And then obviously in the metro area of Atlanta and Athens, Sen. David Perdue, he actually received 20,000 more votes than President Trump. That tells the whole story right there. As to who I would vote for in the future — as secretary of state, as the chief election official, I've made it a policy not to endorse anyone, and I'll continue that policy.

SEALES: You talk about Republican politics being the big tent. A lot of people are concerned that it's shrinking down to like a party-sized tent at a child's birthday. Like if you don't get in line with Trump, you're out. And you have competition in the upcoming primary six months away. Fortunately you have great name recognition, you're writing books, so people want to still hear what you have to say. But Rep. Jody Hice is out there talking as loudly as he can.

He said this at a Trump rally: "It is my deep conviction that Brad Raffensperger has massively compromised the right of the people at the ballot box. He has opened wide the door for all sorts of irregularities and fraud to march into our election system, and it is time that we take charge of this." Mr. Secretary, you know right now you don't need to win over Georgians, you need to win over the GOP base, which seems to be owned by Donald Trump. What's your pitch to them?

RAFFENSPERGER: Well, first off, I just gave you three data points and explained what happened in the race.

SEALES: But they don't believe you.

RAFFENSPERGER: Well, I wrote a 10-page letter to Congress. It's a point-by-point rebuttal of everything. If someone doesn't agree with it, then why haven't they sent it back and said I disagree with you? I told them that there weren't 10,315 dead people that voted. There was actually less than five. They said that there were 66,000 underage voters. There was zero. Things like that, and no one has ever come back and disputed any of my key points that I have. So I'm a fact-based person, and I think that's really what it is. Yes. It's a hard loss. We understand that. I voted for President Trump twice. But at the end of the day, President Trump did come up short in the state of Georgia, and I wrote the book to make sure that I could set the record straight, so people understood exactly what did happen in Georgia. But as it relates to Mr. Hice — Mr. Hice certified his own race with those same machines, those same processes, those same votes, and said that was a legitimate race, yet for president Trump, he said it wasn't. That's a double-minded person, and as a pastor, he really should know better.

SEALES: I know you have been busy for a year-plus, because we took each and every one of those press conferences you did here at Newsy. Well, hopefully this year will be a little bit easier. You have a big primary ahead of you in about six months. Author of the new book "Integrity Counts" and secretary of state of Georgia Brad Raffensperger. Thank you so much sir, appreciate it.