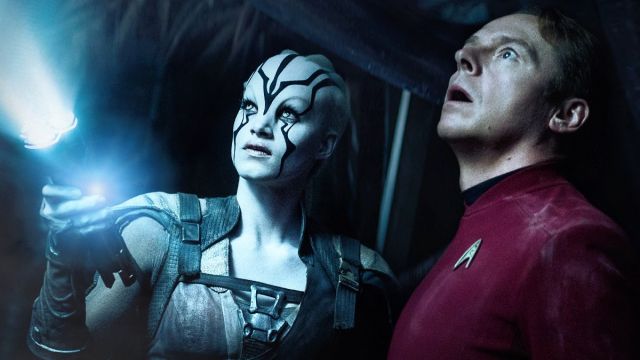 SMS
Box Office Top 3: Latest 'Star Trek' KHAAAN't Match The First 2 Films
By Jamal Andress
By Jamal Andress
July 24, 2016
"Star Trek Beyond" posted the worst debut of the series by about $10 million, but the quality of all the reboot films have been consistent.
SHOW TRANSCRIPT

"Star Trek"'s latest blockbuster boldly attempts to go where its two predecessors went already, but this time, Kirk and crew don't make it.

Taking the No. 1 spot this week is the third installment of the adventures of the USS Enterprise, aka "Star Trek Beyond," bringing in an estimated $59.6 million. That's enough to take the No. 1 spot by a fairly hefty margin and is a lot better than the other two debuts this weekend.

But unfortunately, "Star Trek Beyond" posted the worst debut of the series by about $10 million. "Star Trek Into Darkness" earned about $70 million while the "Star Trek" reboot that premiered in 2009 brought in over $75 million and cost less to make than the third installment.

That being said, the quality of this series has remained constant. "Star Trek Beyond" carries a solid 84 percent approval rating on Rotten Tomatoes, which is right in line with the first and second movies at 95 percent and 86 percent, respectively.

And for the trekkies that care, it looks like Kirk is gonna meet his dead dad in "Star Trek 4" — no matter how highly illogical that might be.

Taking the No. 2 spot this week is "The Secret Life of Pets," bringing in over $29 million and pushing its worldwide box office total past $320 million.

Tied for No. 3 is "Ghostbusters" and the new horror flick "Lights Out." Both films are listed as bringing in almost $22 million as of Sunday afternoon.

The difference, though, is "Lights Out" is already making a profit — quadrupling Warner Bros. modest $5 million investment. "Ghostbusters," on the other hand, still has a ways to go.

As for next week, Jason Bourne is back, and he knows everything ... again.