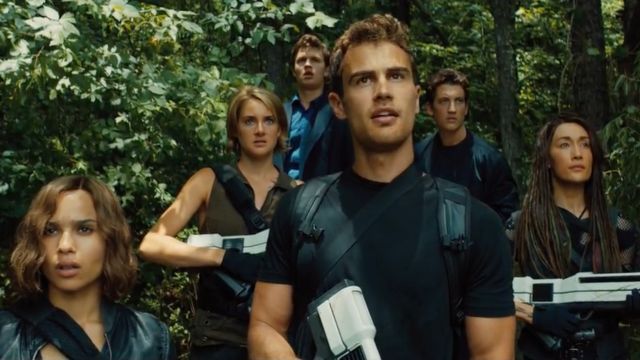 It took a while, but I think we're all finally over the dystopian teen novel-turned four-part movie franchise thing. Either that, or we all REALLY like zoo animals.

Holding strong at the No. 1 spot for the third week in a row is "Zootopia," bringing in an estimated $38 million. Along with the critical praise "Zootopia" has received since its debut, it's having a great run at the box office domestically and abroad. The worldwide box office sales for Disney's latest sit at more than $590 million, nearly $400 million of which came from overseas ticket sales.

The third installment in the "Divergent" series, "Allegiant" takes the No. 2 spot this week, bringing in a disappointing $29 million despite an estimated $110 million production budget.

Not only is this the worst showing the franchise has had at the box office so far, but it's not even close to the debuts of its predecessors. The box office flop is accompanied by an astonishingly bad 10 percent Rotten Tomatoes score.

It seems, critics, moviegoers and potentially the filmmakers have all gotten young-adult adaptation fatigue.

"It's a phoned-in saga in a world where young-adult adaptations are a dime a dozen," YouTube's Jeremy Jahns said.

"Honestly, I just feel sorry for star Shailene Woodley, whose exhaustion appears to reflect the audience's at this point," IGN's Max Nicholson said.

What's worse than all of this is they're making another one.

Taking the No. 3 spot this week is "Miracles From Heaven," bringing in an estimated $15 million in its opening weekend. This is another faith-based film from Sony Pictures Affirm Film Studio, which has seen a lot of success lately.

"War Room" cost just $3 million to produce but ended up raking in almost $68 million before it left theaters.

"Heaven Is for Real," another Affirm films release, had a similar spread, bringing in more than $100 million with a $12 million budget.

With the addition of A-list actress Jennifer Garner and a better-than-usual Rotten Tomatoes approval rating, analysts are expecting "Miracles From Heaven" to pull in even better numbers.

As for next week, all the cross-promotion finally comes to an end, hopefully.