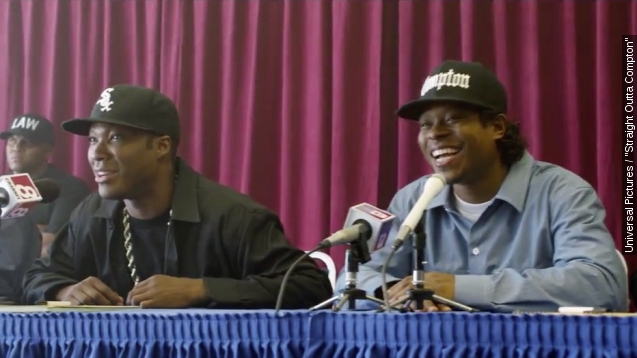 The “Straight Outta Compton” cast and crew passed a major milestone at the box office this weekend and they have two weeks worth of exceptionally bad movies to thank.

For the third week in a row, “Straight Outta Compton” takes the No. 1 spot at the box office, bringing in an estimated $13 million, making the domestic total $134 million. Which leads me to that major milestone I was talking about earlier.

“Straight Outta Compton” is now the highest grossing music biopic ever, beating out Johnny Cash's “Walk the Line” by about $15 million.

This weekend’s haul also makes NWA’s film the highest grossing movie about hip-hop ever, beating out “8 Mile” by more than $17 million.

Now this is where I would list all the records Universal Pictures has broken this year. Instead, I’m gonna go get some food, maybe run some errands and let our producers handle it.

Highest Grossing Year for a Studio Ever (5.53 Billion)

Fastest Studio to Reach $1B at Domestic Box Office Ever

Fastest Studio to Reach $3B, $4B, and $5B at Worldwide Box Office Ever

“Minions” Highest Grossing Animated Film of the Year ($1B)

“Minions” Biggest Opening-Day for an Animated Film Ever ($46M)

“Jurassic World” Biggest Opening Weekend of All Time ($208B)

“Fifty Shades of Grey” Biggest Opening Weekend in February Ever ($85)

Taking the No. 2 spot this weekend is “War Room,” bringing in an estimated $11 million despite only opening in 1,100 theaters around the country.

That’s less than both of this weekend’s newcomers: Owen Wilson’s “No Escape” and Zac Efron’s “We Are Your Friends.” Both of which bombed, by the way.

“War Room” falls directly in line with other successful faith-based films. Critics loathe it, audiences love it and the studio makes one hell of a profit.

“War Room” is rated at a dismal 17 percent on Rotten Tomatoes. Meanwhile the audience score is one of the best of the summer. But if you look at other faith-based films, it’s the same result.

So despite “War Room” being, "shot like a term-life insurance infomercial”  and a “mighty long-winded wincingly overwrought domestic drama…" the film managed to get a very specific group of moviegoers to visit the theater in droves this weekend.

Spending its fifth week in the top 3 is “Mission: Impossible - Rogue Nation,” which brought in an estimated $8.3 million in the States. That just barely edged out Owen Wilson in “No Escape,” which racked up $8.28 million.

As for next week ... (Video via Relativity Media / "The Transporter: Refueled")