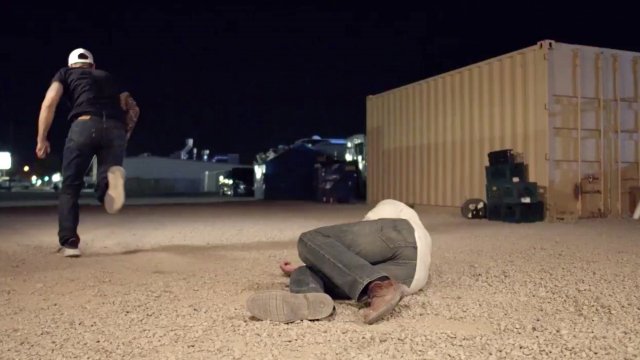 A new Border Patrol video shows a Spanish-speaking migrant killing an innocent man after escaping from U.S. agents. Only it never happened.

The 3-minute video, with actors and fake blood, is called "The Gotaway," the term Border Patrol uses for undocumented migrants who avoid capture.

The fictionalized video ends with a fast succession of news headlines. Some are about undocumented immigrants accused, years ago, of killing White women. Others include false statistics on migrants and crimes.

"It's hugely damaging to DHS and to the career agents and officers and employees who work across the department because it's undermining public trust," said Peter Boogaard, a Department of Homeland Security official under President Obama.

Critics and experts say the propaganda video violates federal law and gravely damages the integrity of DHS, the department in charge of Border Patrol.

"Engaging in propagandistic forms of communication, the kinds that you would expect from a political campaign in the voice of a government agency, raises the question: can you trust what else it says about anything else?" said Kathleen Jamieson, a professor of communication and the director of the Annenberg Public Policy Center at the University of Pennsylvania.

One of the headlines shown at the end of video states that illegal immigration leads to thousands of deaths, rapes and assaults. But those numbers actually refer to crimes committed against migrants during their journey toward the U.S.

Another headline, from far-right Breitbart News, claims that thousands of Americans have been killed by undocumented immigrants. But the article fails to back up the claim.

A large number of studies show that immigrants commit crimes at a lower rate than native-born Americans.

"It is extraordinarily unusual for the government to try to communicate to the public in a manner which suggests that there is an alternative reality," said Jamieson

In a letter obtained by Newsy, immigrant advocates say the video doesn't comply with a federal law known as the Information Quality Act because it contains "blatantly false and misleading information" and "stigmatizes a subset of the American public without any factual support for doing so."

The advocates are asking Border Patrol to permanently remove the video and issue a correction of all misleading information.

Border Patrol Chief Rodney Scott says "The Gotaway" is the first in a series of videos created to motivate agents. He says he decided to share it publicly "to enhance awareness" that effective border security helps keep Americans safe.

A Customs and Border Protection spokesperson told Newsy that it would also share other videos from the series to the public, adding that "releasing our multimedia products will not change based on the allegations" made in the advocates' letter.