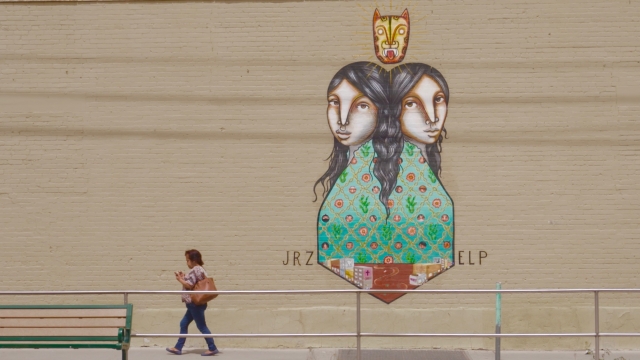 SMS
Border Closure Delayed, But Anxiety Still High For El Paso Community
By Christian Bryant
By Christian Bryant
April 7, 2019
The president's rhetoric and long wait times on international bridges has affected the mental health of some living on both sides of the border.
SHOW TRANSCRIPT

Jennifer Mercado is a music lover. She's an instructor at an El Paso middle school during the week and travels across the U.S.-Mexico border on the weekends to perform with her quartet.

Mercado supplements her income by doing events in Ciudad Juárez, just south of El Paso. But getting there has been a bit more difficult recently.

"I was stressed out last week. They were saying they're going to close the border. And I needed to go to Wednesday. So what if I get stuck in Juarez and I'm not able to come back? Like, a long time — hours."

Mercado is a part of El Paso's mobile community, which consists of people of traveling back and forth across the U.S.-Mexico border.

"Most of us have family or friends or activities in Juárez. You can go to shopping, or go to the movies, live that expensive life. You can do more things with less money."

She and others have experienced longer than normal wait times on international bridges because of fewer Customs and Border Patrol officers at ports of entry. The DHS reassigned officers help process migrant families.

"I'm pulling on all of the department's in the federal government asking them to fill those resource needs that we have because we have declared the emergency."

That emergency stems from the 76,000 migrants who crossed the U.S. southern border in February, the highest number in more than a decade — and that number could go up.

This prompted President Trump to issue a series of head-spinning declarations about closing the U.S.-Mexico border.

"The border is going to be closed."

"We're going to give them a one-year warning."

"I've never changed my mind at all. I may shut it down at some point."

President Trump's rhetoric, along with Nielsen's decision, has added to growing anxiety about what's next for people living on both sides of the border.

"Mentally it is bad. You feel stressed out. And I was telling my mom, I called her and I was like, 'I think I had an anxiety attack the other day.' I wanted to get out of the car and just run. And then when I finally cross the bridge, I was crying. I was in tears. I don't know what happened. But I was there for, like, three hours. That had never happened to me before. And I got scared, you know? Mentally, it is not healthy."

Dr. Eden Robles is a psychology professor at the University of Texas at El Paso. She helps provide regional health care to people living in El Paso and Juárez.

Mercado said that she's relieved that the president isn't closing the border right away, but she knows she could see this situation play out all over again. So all she can do is prepare for the next time.