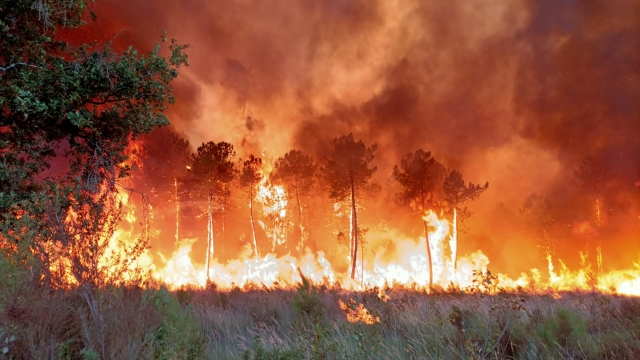 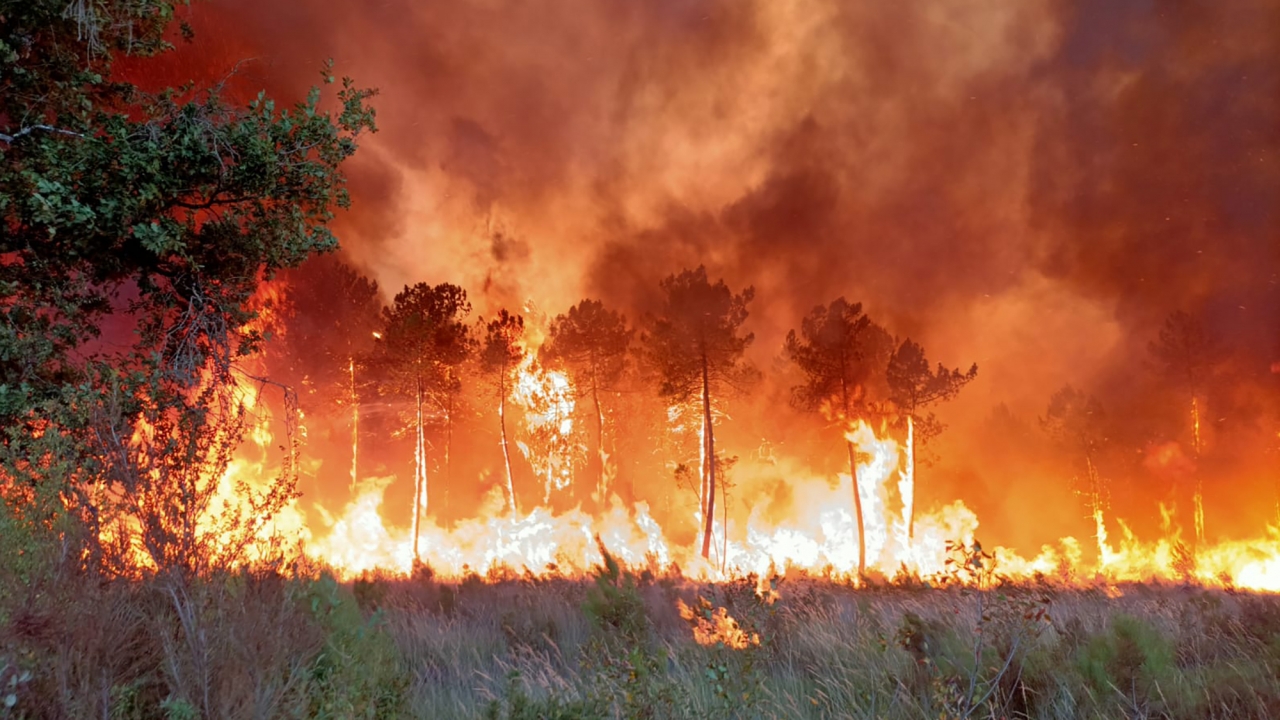 Strong winds and hot, dry weather are frustrating French firefighters' efforts to contain a huge wildfire that raced across pine forests in the Bordeaux region Saturday for a fifth straight day, one of several scorching Europe this week.

Among the worst fires have been in Portugal, where the pilot of a firefighting plane died Friday when his plane crashed while on an operation in the northeast. It was the first fatality in fires in Portugal so far this year, which have injured more than 160 people this week and forced hundreds to be evacuated.

Fire season has hit parts of Europe earlier than usual this year after an unusually dry, hot spring that left the soil parched, and that authorities attribute to climate change.

As the worst French fire moved closer to inhabited towns, some of the 11,000 people evacuated in the region described fear and uncertainty about what they'd find when they get back home. Images shared by firefighters showed flames shooting across a mass of pine trees and black smoke stretching across the horizon.

Firefighters focused efforts Saturday on using fire trucks to surround villages at risk and save as many homes as possible, Charles Lafourcade, overseeing the French firefighting operation, told reporters at the scene.

Some 3,000 firefighters backed by water-dumping planes are battling the blazes in southern France, the president said, and Greece sent firefighting equipment to help.

French firefighters managed to contain one of the worst fires overnight, near the Atlantic coast resort of Arcachon that is popular with tourists from around Europe, the regional emergency service said Saturday.

But it said "tough meteorological conditions" thwarted efforts to contain the biggest fire in the region, which started in the town of Landiras, south of a valley of Bordeaux vineyards. Regional prosecutors suspect arson.

The two fires have burned at least 9,650 hectares of land in recent days.

A similar scene is playing out in Portugal, where more than 1,000 firefighters worked Saturday alongside ordinary citizens desperate to save their homes after a long week of battling multiple blazes that kept flaring up around the country. The fires have been fanned by earlier-than-usual extreme temperatures and drought conditions.

Portuguese state television RTP reported Friday that the area burned this year has already exceeded the total for 2021. More than 30,000 hectares (74,000 acres) of land has been burned, it said, most in the past week.

Across the border, Spain was struggling to contain several fires, including two that have burned about 7,400 hectares of land.

In southern Andalusia, some 3,000 people were evacuated from villages in danger from a blaze started near the village of Mijas in the province of Malaga. Around 200 firefighters supported by 18 aircraft tried to contain the fire. Authorities were investigating its cause.

For a sixth day, firefighters were also trying to bring under control a fire started by a lightning strike in the west-central Las Hurdes area. Some 400 people from eight villages were evacuated Friday as the flames approached their houses and threatened to spread into the nearby Monfrague National Park.

Croatia and Hungary have also fought wildfires this week, as have California and Morocco.

Portuguese authorities said a July national high of 47 degrees Celsius (117 Fahrenheit) was registered in the northern town of Pinhao on Wednesday.

"All heat waves studied so far in Europe are getting warmer," said Robert Vautard of the Pierre-Simon Laplace Institute at the Sorbonne University. "As long as greenhouse gas emissions are not reduced to zero, heatwaves will continue to intensify, become more frequent and last longer."