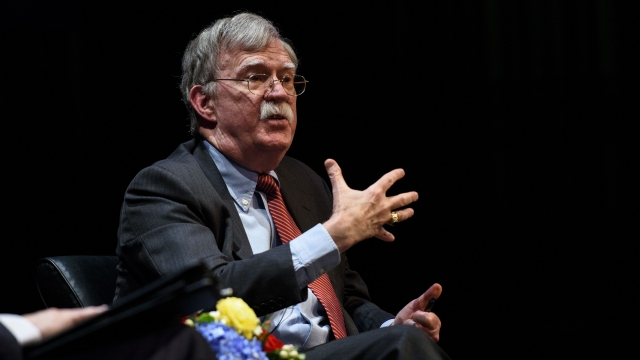 During an interview at Duke University, Bolton said it's unfair President Trump can tweet about him, but he can't publicly talk about his time at the White House. He said he hopes the things President Trump told him "become public someday."

Bolton also said the White House is still reviewing his book: "The Room Where It Happened: A White House Memoir." Last month, the White House told Bolton he couldn't publish his book because it contains "significant amounts of classified information."

The book reportedly says President Trump personally told him security aid for Ukraine should be withheld until the country agreed to help investigate his political rivals. President Trump tweeted he "never" said the aid to Ukraine was tied to investigations into Democrats.

At one point during Monday's interview, Bolton was asked if he thought the president's phone call with Ukraine's president was "perfect," like President Trump has insisted. Bolton responded: "you'll love chapter 14."

Since he said he had firsthand knowledge regarding the Ukraine aid, Bolton offered to testify in the president's impeachment trial if he was subpoenaed. The Senate voted not to call any witnesses and later acquitted President Trump.