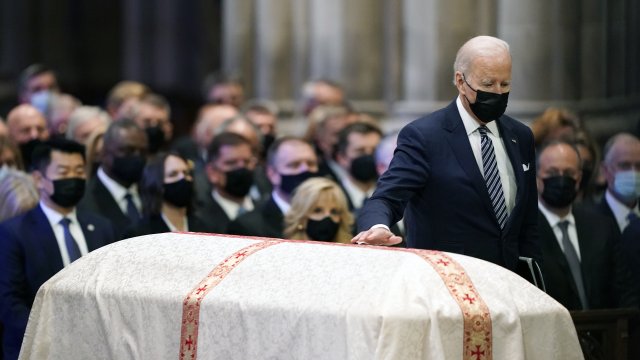 Bob Dole was honored Friday at Washington National Cathedral and the World War II monument he helped create as top leaders from both parties saluted the longtime Kansas senator's ability to practice bare-knuckle politics without compromising his civility.

Displaying a bipartisanship rare in modern government, politicians in office and out came together to pay homage to Dole's hard-scrabble rise from wounded war veteran to Senate stalwart to three-time, unsuccessful presidential candidate.

"He could be partisan, and that was fine," said President Joe Biden. "Americans have been partisan since Jefferson and Hamilton squared off in George Washington's Cabinet. But like them, Bob Dole was a patriot."

Joining President Biden at the funeral service were members of Congress, Cabinet officials, three Republican former vice presidents and Bill Clinton, who beat Dole to win reelection as president in 1996.

"There's something that connects that past and present, war time and peace, then and now," said President Biden, who touched Dole's casket before addressing the service and mentioned their 50 years of friendship. "The courage, the grit, the goodness and the grace of 2nd Lt. Bob Dole, who became Congressman Dole, Senator Dole, statesman, husband, father, friend, colleague and — a word that's often overused, but not here — a genuine hero."

Dole, who died Sunday at age 98, was severely wounded during World War II, served nearly 36 years in Congress and was GOP Senate leader for more than a decade. Besides his sharp, often sarcastic tongue, among Dole's best-known attributes were his pragmatism and self-deprecating wit — representing the sense of compromise of a bygone era.

While calling him a "giant of our time and of all time," President Biden said Dole was worried at the end of his life about American democracy being threatened by bitter political battles and had noted that infighting from both parties "grows more unacceptable day by day."

Still, Democrats and Republicans coming together to praise Dole's ability to put country and public service over ideology was the overriding theme.

President Biden offered vivid, visceral details during his eulogy, speaking about Dole being born a child of the Dust Bowl, volunteering as a young man for military service and how he came back to "painful" years recovering from his wounds.

"God, what courage Bob Dole had," the president said.

Former Republican Kansas Sen. Pat Roberts said Dole used humor as a political tool, delivering deadpan punchlines which helped let "the air out of the partisan balloons." Dole's daughter, Robin, read a letter her father wrote to his staff in which he said "I believe in the future of the United States of America."

After the funeral service, Dole's casket traveled to the World War II Memorial on the National Mall, which opened in 2004 and which Roberts said would not have existed with Dole spending years spearheading the legislation that erected it.

He also recalled Dole often spending Saturday mornings at the memorial, greeting veterans visiting as part of trips he helped organize. Dole was a longtime advocate for the Honor Flight Network, which arranges for veterans to travel to Washington to see memorials dedicated to their service.

Former Democratic Senate Majority Leader Tom Daschle said Dole once told him he thought about being buried at the World War II memorial. Daschle also said Dole's sense of duty extended beyond veterans, including when he left the presidential campaign trail to attend the 1996 graduation party of a girl paralyzed in a car crash.

Addressing the crowd at the memorial, actor Tom Hanks asked, "How many structures in this city exist but for the efforts of one man?"

"It was Bob Dole who willed this memorial into place," said Hanks, who starred in the World War II drama "Saving Private Ryan."

Dole suffered paralyzing, near-fatal wounds during World War II. Gen. Mark Milley, chairman of the Joint Chiefs of Staff, recalled how, after Dole was hit amid fighting in the Italian mountains in 1945, he was dragged behind a wall by a fellow soldier and "lay there, facing up in the dirt. Not knowing if he would live or die. Unable to move as the battle raged around him. And he lay there for 10 consecutive hours before medics were able to reach him."

The service ended with Milley escorting Dole's wife, former North Carolina Sen. Elizabeth Dole, as she and Robin touched a wreath in his honor, then bowed their heads in prayer as taps was played.

Dole's body is also traveling to Kansas, where weekend events include a public viewing in his hometown of Russell. He will eventually be interred at Arlington National Cemetery.

Friday's services followed Dole lying in state on Thursday under the dome of the U.S. Capitol he so loved. Dole served as a Kansas state legislator before running for Congress in 1960, joining the House for eight years then going on to win the Senate seat.

Dole was early in his career seen as a GOP "hatchet man." He was a mentee of Richard Nixon and chairman of the Republican National Committee during the Watergate era. During his Senate career, though, Dole grew to see the value of reaching across the aisle and secured his more lasting achievements.

Those included the Americans with Disabilities Act that to this day ensures a level of accessibility as a civil right. Dole also fought to protect Social Security benefits for elderly Americans and supported civil rights — even if such actions weren't always politically popular with everyone.

"Over the opposition of many in his party and some in mine, he managed a bill to create a federal holiday in the name of Martin Luther King, Jr.," President Biden said. "Bob Dole did that."