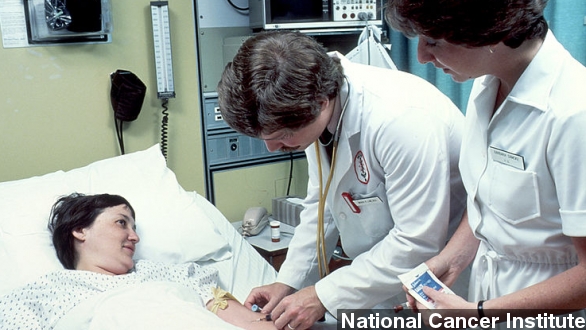 By Jasmine Bailey
April 7, 2014
Researchers at Stanford University have discovered a simple blood test has the potential to identify many different cancers.
SHOW TRANSCRIPT

"Researchers say the test works for the most common types of cancer including breast, lung and prostate." (Via News 12 New Jersey)

It works by using tumor DNA as a biomarker. Every system in our bodies has its own biomarkers, and they can be used to diagnose and analyze all sorts of different biological conditions.

Plus, according to NPR, the blood test cuts the cost of diagnosis to a fraction of current methods. (Via NPR)

According to the press release: "Cancer cells are continuously dividing and dying. As they die, they release DNA into the bloodstream, like tiny genetic messages in a bottle. Learning to read these messages ... can allow clinicians to quickly and noninvasively monitor the volume of tumor, a patient's response to therapy and even how the tumor mutations evolve over time.​" (Via EurekAlert!)

Although the test doesn't help cure cancer, the World Health Organization notes, detection is key when it comes to fighting cancer.

Researchers say they are optimistic they can improve the test in order to identify a much higher rate of cases.