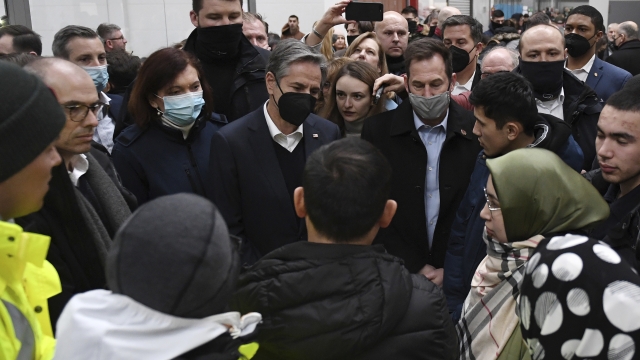 U.S. Secretary of State Antony Blinken on Saturday visited a welcome center set up by Polish authorities in what once was a shopping mall in Korczowa, close to the border with Ukraine, where roughly 3,000 refugees are taking shelter after the Russian invasion of their homeland.

While at the border later, Blinken stepped briefly onto Ukrainian soil to meet Foreign Minister Dymtro Kuleba, who predicted Russia would be defeated but appealed for more military assistance to lower the cost in lives that he said victory will require.

At the refugee center, America's top diplomat heard harrowing tales from mothers and their children who described long and perilous journeys — and the shock of the sudden disruption and the fear for their lives — after fleeing the devastation of the war.

"Near our home we heard bombs," said Venera Ahmadi, 12, who said she came with her brother and sister, six dogs and seven cats from Kyiv, the capital of Ukraine, more than 600 kilometers (372 miles) away. "We walked to the border, I don't know how many hours. We crossed the border on foot."

Natalia Kadygrob, 48, reached the center with her four adopted children from Kropyvnytskyi, almost 800 kilometers (about 500 miles) by bus on their way to her brother's home in Germany. Her husband stayed behind.

"There they bombed planes at the airport," she said. "Of course we were afraid." 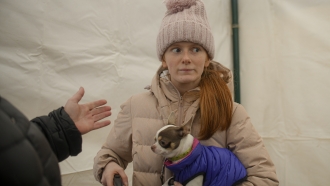 Anna said her home had been destroyed by a shell or a rocket.

She was in the basement with her daughters when the explosion happened. "They should be in school," Anna said. "They are children, they don't understand."

Blinken then met with Kuleba on a visit to the Korczowa border crossing where Polish authorities escorted small groups of refugees — about 20 at a time — across the frontier from the Ukrainian town of Krakovets as sporadic snow flakes fell from a gray sky.

Groups mainly of women, children and elderly men — grimly rolling their possessions in luggage and carrying infants and the occasional family pet — made their way into makeshift processing centers set up in tents on Polish territory.

The foreign minister said he wanted to convey a simple message: "Ukraine will win this war because this is the people's war for their land and we defend the right course,." He added, "The question is the price, the price of our victory."

Kubela said that if Ukraine's allies "continue to take bold, systemic decisions to step up economic and political pressure on (Russia), if they continue to provide us with necessary weapons, the price will be lower" and "this will save many lives in Ukraine."

Blinken praised Kuleba, President Volodmyr Zelenskyy and other officials for their courage and "inspiring" leadership during the crisis. He said support for Ukraine and pressure on Russia to end the war would increase "until this war of choice is brought to an end."

Kuleba thanked Blinken for the support so far but said Ukraine needed even more if his country's predicted victory was not to come at too high a cost. He lamented that NATO on Friday had rejected appeals from nonmember Ukraine and others to set up a no-fly zone over the country. 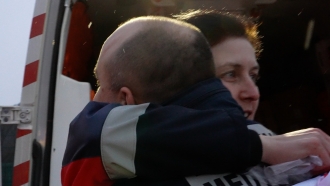 "We are now in the phase where maybe saying 'No, we're not going to do that', but the time will come," Kuleba said. "It's again the issue of price. It is the people of Ukraine who will pay the price for the reluctance of NATO to act."

Blinken earlier was in the city of Rzeszow for talks with Polish Prime Minister Mateusz Morawiecki and Foreign Minister Zbigniew Rau a day after attending a NATO foreign ministers' meeting in Brussels. The alliance pledged to step up support for eastern flank members such as Poland to counter the Russian invasion. Poland is seeking more U.S. forces on its territory, where there are currently more than 10,000 American troops.

Rau said Poland had already taken in more than 700,000 refugees from Ukraine and that he expected hundreds of thousands more in the coming weeks unless Russia backs down.

"Poland will never recognize territorial changes brought about by unprovoked, unlawful aggression," he said, adding that his country will demand that alleged Russian war crimes committed in Ukraine will be prosecuted.

Morawiecki and Blinken discussed stepping up sanctions and freezes of assets on Russia, which Morawiecki said should be "crushing" for Russia's economy. No Russian banks should be exempted from the exclusions from the SWIFT system, he said. Currently, all but the largest Russian banks have been kicked off the financial messaging service.