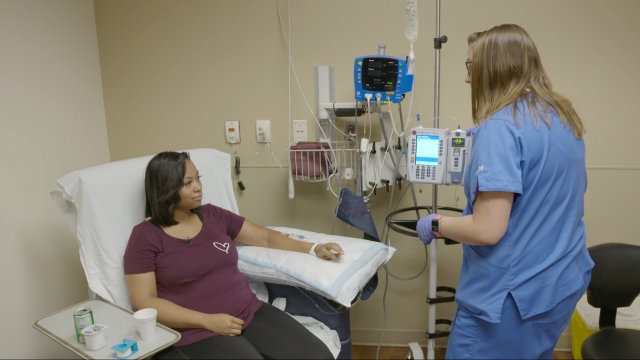 CRISPR may be a cure, but clinical trials may lack volunteers because of black patients' mistrust of biased and unethical medical practices.

"It's like something stabbing you in your bone just like repeatedly. And you can't stop it. And... it's something that makes you really tense, you just can't move... It's been a part of my life since I was six months old."

Twenty-three-year-old Maiya Washington has been living with sickle cell, a life-long "invisible" disease. It's a disorder with no visibly detectable signs and not often talked about.

Sickle Cell Disease impacts about 100,000 Americans, mostly African Americans. It's a genetic defect that affects red blood cells — turning normal round red blood cells into sickle shapes. That shape can cause clumping and block oxygen and blood flow, which can then lead to a wide range of health issues like strokes, kidney problems, and organ failure.

"It's really debilitating, honestly," says Washington. "And it's hard because... you need somebody there with you. It's not like you can take yourself to the hospital. Or if you're at home and you're trying to manage the pain by yourself, you still need somebody there with you, because you're not able to do the simple things like go to the restroom by yourself, get yourself some water, fix yourself something to eat…"

Currently, the only option to cure sickle cell disease is a bone marrow transplant, also called a stem cell transplant. But it requires a matching donor, which can be difficult to find. But now, the gene-editing tool CRISPR may bypass the need for a match and serve as a cure for most people. Dr. John Tisdale has worked on another Sickle Cell Disease gene therapy at the National Institute of Health.

"And it's all coming from red blood cells with a single misspelling, in their hemoglobin. So we should be able to fix that it's just one base," says Tisdale.

Is The Machine That Can Snip And Swap Our DNA Awesome Or Ominous?

CRISPR scans our genes to find the ones that might trigger certain diseases.

Here's how it works. First, stem cells are pulled from the patient's body. CRISPR is used to edit the DNA, and the new, edited stem cells are then re-inserted back into the body. The hope is that it will generate healthy red blood cells. Changes to the DNA won't be passed down to future children.

Could this development lead to a cure for sickle cell? A clinical trial using CRISPR can help determine that. So far, testing on 12 people has already begun. Biopharmaceutical company Vertex has partnered with CRISPR Therapeutics and they're looking for more volunteers for this clinical trial.

Dr. Alexis Thompson, Head of Hematology, Lurie Children’s Hospital of Chicago says, "I certainly am very excited about it as a provider, is that patients will have choices. There is not a one size fits all for sickle cell disease, or really, really for in a community… For the first time, there will be multiple, multiple clinical trials that are opening and hopefully those will lead to new treatments... because much of what we learn from sickle cell will be rapidly applicable to other conditions."

But as exciting as the potential for a cure for Sickle Cell Disease is, finding enough volunteers for testing is really difficult. Sure, CRISPR poses risks, including death. But one of the biggest barriers is black patients' mistrust of the medical community, so much so that clinical trials tend to lack black patient enrollment. This is based on racist treatment both in the past and present. Science writer Usha Lee MacFarling points to unethical medical practices of the past, like the use of Henrietta Lacks' cells without permission and leaving syphilis untreated in hundreds of black men in the Tuskegee experiment.

"I think there's just a huge awareness in the black community of these studies that were, you know, racist, that really treated black women of color and poor women as guinea pigs. It's a very sharp pain… And it's definitely affecting people's reluctance, and inability to trust, the largely white medical establishment," says MacFarling.

And today, some black patients say that bias persists in medicine. Because sickle cell patients visit the emergency room an average of three times a year, they're often assumed to be addicts for seeking drugs to ease their pain.

Scientists have eliminated HIV from some infected mice by using new therapies, including gene editing.

"Doctors [have]...given me an inappropriate amount of medicine. That wasn't helping, that kind of basically looked at me as like, you know, drug-seeking, or just like faking it," says Washington.

In spite of all this, Maiya says she wants to participate in the trial because of how excruciating her pain is.

"I feel as though most people who deal with sickle cell or any kind of disability that alters their quality of life, they're going to be willing to figure out anything to get rid of what they had," says Washington.

In order to build trust between black sickle cell patients and CRISPR researchers, organizations like the American Society of Hematology and the Minority Coalition for Precision Medicine are doing community outreach. That includes even teaming up with churches.

Michael Friend, co-founder of Minority Coalition for Precision Medicine says: "It was kind of very easy to talk to faith-based leaders about sickle cell disease because it's a disease that primarily affects African Americans. And it's a disease that we found prevalent in most churches, and most pastors were familiar with the disease."

Scientists Concerned Over Program That Enlists Bugs To Spread Viruses

DARPA insists its research program is intended to mitigate the effects of national disasters and outside attacks on crops.

For now, every month Maiya's gets a blood transfusion to ease the pain. Her baby is lucky -- she doesn't have sickle cell, because her father doesn't have the gene.

"I wake up every day and she's there. She's my best friend and I love seeing her watching her grow so far, says Washington.

Most sickle cell patients don't live past their 40's and Maiya does worry about her future.

She says, "it does concern me because I want to be here as long as possible for her. And hoping that, you know, there's something that can come up that can be permanent, you know, as in terms of a cure or medication...  just to help us have a longer lifespan and live a better quality of life. Because I do want to be able to see her grow up."