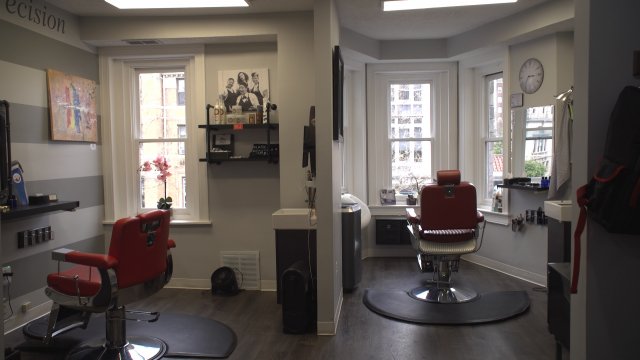 "It’s very stressful because we don’t know when we’re going to reopen and how we’re going to pay our bills long-term … if the shutdown continues," said Lesley Bryant, owner of Lady Clippers Barbershop.

"I do worry about my staff because they have children and families to maintain. As I'm waiting for this money, I'm concerned, you know, can I maintain my shop, long-term? What type of debt I'm going to undertake, not only personally, but also to support my barbers," said Bryant.

Congress initially created the program last month as part of the CARES Act. It made $349 billion available to small businesses and individuals to help cover payroll and other expenses. But the money ran out, leaving thousands of black business owners like Bryant wondering when — or if — they might see relief.

"This is typical of when you have a program that is not segmented and marketed by community and directly to people. It actually drives more inequity, even if it is something that is well-meaning," said Eddie Koen, CEO of the Urban League of Southwestern Ohio.

"What we saw was really an absence of black business relationships with banks in particular and financial institutions broadly. So they were left in the dark of, where do I go?" said Koen.

"And perhaps the largest reason for that is that the banks don't exist anymore in their neighborhoods. There are 'banking deserts' throughout every urban area in America," said Galen Gondolfi, chief communications officer with Justine Petersen.

Though the government has not required lenders to track and report the race of Paycheck Protection Program recipients, existing research shows clear fault lines in who gets access to bank financing.

And even when adjusting for wealth and creditworthiness, black and Latino-owned businesses rely less on bank financing.

According to a 2019 report, 28% of black business owners relied on personal funds as the primary funding source, compared to 16% of white owners.

Cortaiga Collins is the owner of the Good Shepherd Infant and Toddler Centers in St. Louis, Missouri. She knows firsthand how hard it can be to qualify for finances to launch a small business.

"I reached out to the big banks here in St. Louis, Missouri, and I was unable to get any help at all," said Collins. "I came against so many obstacles trying to get someone to finance my vision. From a bank's standpoint, I was not credit-worthy."

That’s when she turned to Justine Petersen for help, a community development financial institution, or CDFI, in St. Louis.

"So we're very much a hybrid of social work and banking," said Gondolfi of Justine Petersen. "This is all about making sure that dollars are available for those businesses that heretofore have been shut out by mainstream finance and have now had the opportunity to access safe and affordable capital."

It’s a concern that seems to have been overlooked in the first round of the Paycheck Protection Program.

After a public outcry in who was getting the loans, almost 90 Democratic members of Congress asked the Trump administration to “ensure that minority-owned businesses are not shut out” of federal rescue money.

Experts say the smaller the business, the more difficult it is to absorb a financial shock like COVID-19, especially for black-owned businesses where 96% have no employees, compared to 80% of businesses overall.

Part of the new PPP funding includes a $60 billion set-aside for smaller, community-based lending institutions that are more likely to serve minority-owned businesses.

They were instrumental in not only helping Collins get initial financing but also secure a PPP loan after she was unable to get answers from her credit union.

But some are concerned that even with the new provisions, the second round of funding will fall short.

"The set-aside is definitely something that we embrace," said Gondolfi. "But we feel, one, it's probably not enough money, and two, there's just not enough CDFIs involved to really make the PPP impactful for those businesses most in need."

Another barrier is that lenders must first be approved by the Small Business Administration before they can participate in the loan program.

"Not every CDFI is in a position to administer the PPP," said Gondolfi. "There's far too much need than what merely the CDFI community and other mission lenders can actually fulfill. And so as much as round two of PPP is very much making the program more accessible, I still believe there's going to be work undone."

Entrepreneur Lesley Bryant is still waiting to see if she will get a loan this round; and if she’ll be able to keep her employees on staff.

"The notion of more money coming to help small businesses is great," said Bryant. "It has been three weeks since I applied for the PPP," she continued. "It's a day by day, week by week waiting game. Who knows when it's coming? But I pray that it's coming soon."