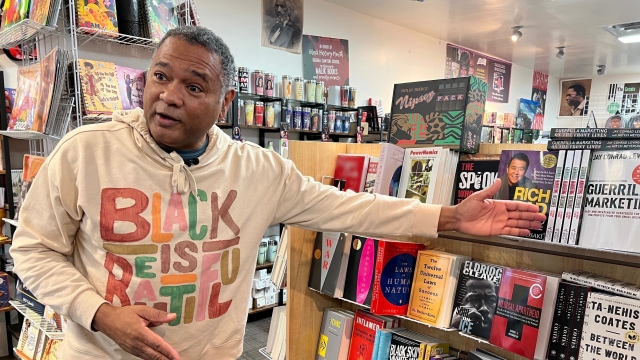 On the other side of glass in a busy Los Angeles mall, owners say what looks like books are actually seeds of change.

"You know, I consider ourselves book activists because we use books as a way to make a difference and a change in our community," Malik said.

"We get people in here, feeling it and cry and say, 'Thank you,' for just giving them the opportunity to come in and feel and see themselves," April said.

The Muhammads own two locations and both stores have seen a boost in business after the police-involved murder of George Floyd.

Dr. Joyce-Zoe Farley, a professor of African American studies and public history at the University of Alabama at Birmingham, says it's common to see regrowth in these types of stores after such tragedies.

"A lot of it has to do with incidents of police brutality," she said. "And when they happen, people are much more encouraged and want to read more about to figure out 'How do these things still happen?'"

"After the murder of George Floyd is where a shift happened," Malik said.

"Not only George Floyd, but Nipsey Hussle, especially in this community," April said.

The books their clients look for vary, but many of them simply cannot be easily picked off a shelf in a big box store.

"Dr. Francis Cress Welsing or 'Nile Valley Contributions to Civilization,' or one of my favorites — which is Dr. Claud Anderson's book — 'Powernomics,'" Malik said. "Those books are very important because they have a different view and perspective."

With that niche in mind, Malik Books has been able to become a place to present history from a Black standpoint, show little girls they can take pride in the skin and hair they're in, and tell them they can dream big.

Malik Muhammad has been selling books for more than 30 years. Though the store has had its ups and downs — even closing at one point — the Muhammads love their work.

"The Black bookstore will be forever," Farley said. "It's like, you know, Black soul food restaurant. Its popularity may wane with every generation or what's going on in the world, but it's always going to be a solid institution."

"I know for a fact that this is what I was born to do because I tried to jump off the ship and go do other things," Malik said.

This family says they plan to keep planting seeds that will hopefully sprout an even more enlightened community.