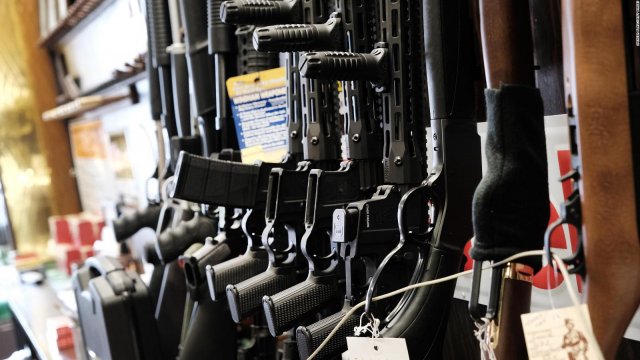 SMS
Black Americans and Women Fueling Continuing Surge in Gun Sales
June 27, 2021
Gun shops are seeing a spike in sales among black people and women due to rising crime in cities across America.
SHOW TRANSCRIPT

A sector of retail in America that never took a hit during the pandemic is gun sales. In fact they’ve been spiking since the pandemic began. Two groups that are helping to fuel the surge are black gun owners and women

"Range is hot, eyes and ears!"

"It's a little intimidating.

These black women at this gun range in Covington, Georgia are practicing how to fire a gun. Some of them are doing it for the very first time.

Valerie Marks, a first-time shooter, said: "I needed to learn the how, when, how to’s and dos and don'ts."  "What's it like to be out here with all of these black women?"

Carla Russell, a gun owner, said: "It's beautiful. Like I was saying, for me, it's a feeling of self-empowerment."

And a desire for training to protect themselves and their families.

Russell said:  "I feel like in this country, in this climate, if you don't know how to take care of yourself, you're at a disadvantage."

Gun sales spiked during the COVID-19 pandemic, with women and people of color driving a majority of that increase, according to the National Shooting Sports Foundation. The number of black buyers increased 58 percent last year compared to 2019, more than any other group.

Philip Smith of the National African American Gun Association said: "I think for the most part, we're getting guns for self defense.”

Smith is the president of the National African American Gun Association He says his group has seen a dramatic increase in membership over the last year.

Smith said: "I'm talking to black doctors, nurses, lawyers, biochemists, from every walk of life in the African American community and they're saying, "Hey Phil, we had conversations about getting a gun tonight.'"

He says they have seen more interest from women specifically.

"Black women have stepped up and they're joining in droves,"  he said.

Some of the people here have never shot before and you can see them getting that one-on-one training before aiming their gun at the target and firing. They say this is something that is very empowering to them and something they're glad they've been able to do.

While the latest spike in gun sales among black buyers may be driven, in part by the pandemic and an uptick in crime in major cities nationwide, it’s not necessarily new.

Colin Mapp of the Bass Reeves Gun Club said:  "I mean, guns have always been in our history, you know, it's just, it's just not told."

But could carrying a gun for protection become a factor that could lead to a deadly confrontation with police? That’s also on the minds of black gun owners.

"When you have a gun and you're a black gun owner, you have a different set of rules," Smith said.

Philando Castile, who was licensed to carry, was shot and killed in 2016 by a police officer during a traffic stop. The officer said he opened fire when he thought Castile put his hand on his firearm. He was later found not guilty on all counts

On the range, they want to shift what gun ownership in America looks like

Natsot/Young "Are you hoping to change the perception of black folks and guns?"  Stephanie Purdy/Gun Owner "I do, actually, I do because I don't see why we can't exercise our Second Amendment rights. If everyone else can, why can't we?"

That’s a notion heard over and over at this range changing the perception when it comes to black people and guns. The shooters say they’re worried about rising crime, like everyone else.