The Artist Behind This Anti-Trump Billboard Is Getting Death Threats 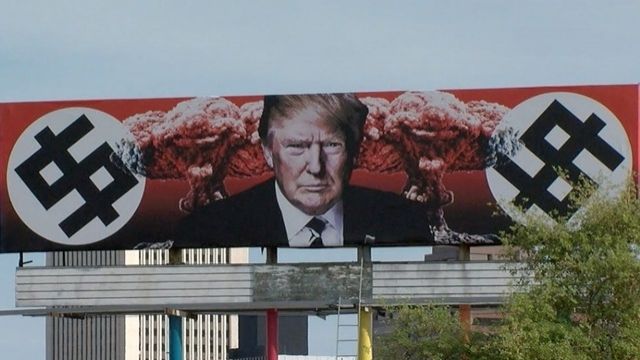 SMS
The Artist Behind This Anti-Trump Billboard Is Getting Death Threats
By Jake Jones
By Jake Jones
March 19, 2017
The property owner says she'll keep the billboard up as long as President Donald Trump is in office.
SHOW TRANSCRIPT

A billboard criticizing President Donald Trump popped up over the weekend in Phoenix.

The billboard, owned by Beatrice Moore, depicts Trump in front of two mushroom clouds. The dollar signs on each side of the billboard sit in white circles on a red background, and the angle and font of the dollar signs make them easily mistakable for swastikas at first glance. On Trump's lapel is a Russian Federation flag pin. Moore also owns the property underneath the billboard.

The other side of the billboard has a different message. It shows five hands from different races spelling out "unity" in sign language.

Moore commissioned the artist to create it, and both say they've gotten death threats.

For the artist, Karen Fiorito, being at the center of controversy is nothing new. 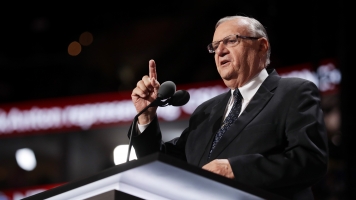 The Arizona State University graduate has created provocative billboards before.

Her more recent billboards are in California. They focus on the state's multiyear drought and highlight the importance and everyday use of water.

Fiorito's first provocative billboard was displayed on the same spot as her Trump billboard. In 2004, her work showed then-President George W. Bush, Vice President Dick Cheney and other politicians with the slogan, "Dear America, We lied to you for your own good. Now trust us."

Moore says she plans to keep the billboard up as long as Trump is in office.