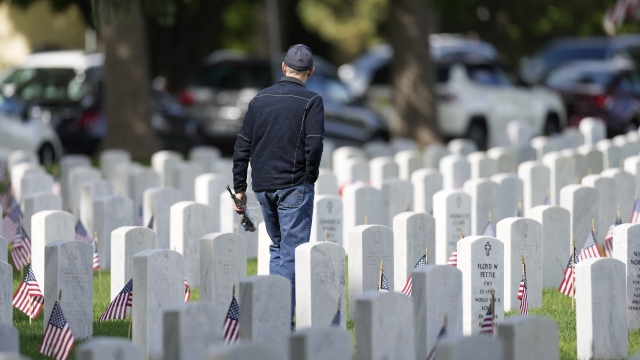 President Biden mentioned the bill in his Memorial Day remarks, saying we have a duty to do right by service members who died of toxic exposure.

Over Memorial Day weekend, crowds gathered in Washington, D.C., to keep up momentum in the fight for U.S. veterans.

TV host and comedian Jon Stewart is just one of many in the fight to help veterans exposed to toxic burn pits.

"This country can't be this broken," Stewart said. "If we can't do the simple [expletive], we have nothing."

Burn pits produced toxic smoke now linked to illnesses that include multiple cancers. It’s estimated 3.5 million vets were exposed, but about 70% of burn pit claims have been denied.

What's more, many vets or their family members have had to prove their illnesses were related to exposure. Advocates want to take that burden of proof away.

"This may be one of the lowest-hanging fruit of the American legislative agenda," Stewart said. "Those that took up arms in defense of this country and its Constitution suffered grievous harm in that defense, and when they came home, we put them on trial.”

Just weeks ago, the top-ranking senators on the Senate Committee on Veterans’ Affairs announced a new deal.

"It was just time to think about what we were trying to do here and doing right by the veterans that have served this country in the military," said U.S. Sen. Jon Tester of Montana.

Now Senate Majority Leader Chuck Schumer vowed to bring this bill for a Senate vote the week of June 6.

Opponents worry about the cost and overloading an already stretched VA.

"I actually think that's not much of an excuse because we send folks off to war, we expect them to fight," Tester said. "We expect them to do their job, they come back, I expect the VA is going to give them the benefits they've earned whether it's in health care, education or housing, whatever it might be, that's their job."

In a press call last week, Sen. Jerry Moran of Kansas, a Republican, said this bill is an example of Republicans and Democrats coming together to make sure our veterans who served will finally have a path forward.

This issue has the support of President Joe Biden, who has said he believes his late son Beau's cancer may be linked to toxic burn pit exposure.