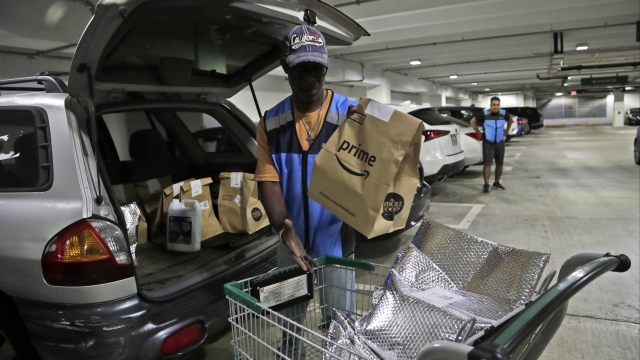 On Thursday, Amazon posted its biggest profits to date, showing that delivery-based services are thriving during the COVID-19 pandemic.

In a conference call, Amazon CFO Brian Olsavsky noted a 41% increase in sales since this time last year.

“We began to see a significant increase in customer demand beginning in early March, and demand remained elevated throughout Q2," Olsavsky said.

Several big tech companies posted quarterly earnings after markets closed Thursday, and unlike most of the struggling economy, most saw revenues and profits grow during the COVID-19 pandemic.

Alphabet, Google's parent company, pulled in about $38 billion this quarter, down slightly from Q1. A chunk of the losses came from downturns in Google ad search revenue, which pulled in about $21 billion, down $2 billion from the same time last year.

“Digital is done on a daily basis,” said P.K. Kannan.

Experts, like P.K. Kannan from the University of Maryland, tell Newsy this ad fallout was common for sellers during parts of Q2 because digital ad revenues can be turned off relatively quickly.

"For search ads, you actually bid daily. And the same thing with display ads that you may buy on social media, those things are done on a daily billing scheme. "

Facebook fared better than Google despite those setbacks and an ad boycott. Facebook made $18.6 billion in Q2, roughly $1 billion more than it made last quarter, and up from $16.9 billion a year ago. Its profits also jumped 98% to $5.2 billion.

Apple’s revenues trended slightly upward, from $58.3 billion in Q1 to $59.7 billion in Q2. CEO Tim Cook said Apple faced financial setbacks when stores were forced to close amid worldwide shutdowns, but software sales helped make up for that.

"We had strong performance in our digital services with all-time revenue records in the App Store, Apple Music, Video, and Cloud services," Cook said.