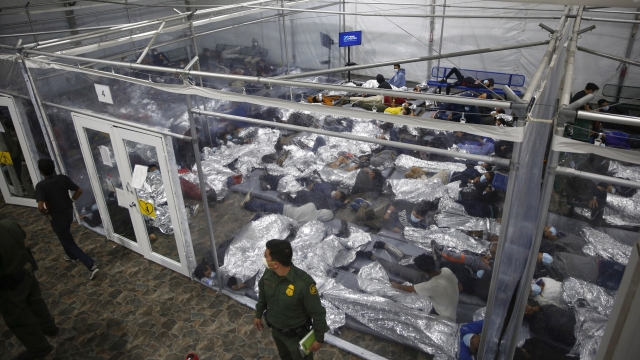 As a candidate, Joe Biden promised to change the way the government approached immigration.

"Get children out of cages. Reunite families," said Joe Biden.

Now more than three months into office, his administration's effort to deal with a surge of unaccompanied minors crossing the southern border has been one of the president's biggest struggles.

"They should have known it might happen, I think," said Theresa Cardinal Brown, a former DHS official and managing director of immigration policy at the Bipartisan Policy Center. "And there's been some indication that the Biden administration believed that their messaging of 'don't come now' would work, and I think that was a fallacy. They should not have believe[d] that [and] they should have been planning."

Migrant children are supposed to be transferred from Border Patrol into the care of Health and Human Services within 72 hours. But due to the unprecedented surge, many stayed much longer as HHS scrambled to find places to house them. Newsy has learned that HHS took the unusual step of placing staff at some Border Patrol facilities to quickly unify kids with sponsors, but it may not be enough to handle the growing influx of children expected to arrive this year.

Government data shows the number of unaccompanied children in HHS care nearly quadrupled since the end of January to over 20,000 by late April. A monthly total that could continue.

Advocates point out that in addition to quickly reuniting these children with their parents or other relatives, more also needs to be done after they leave HHS care and while they wait for an immigration hearing.

"What they need to do simultaneously is beef up the services and the adults with [whom] the child's going to have contact with after they're reunified," said Jennifer Podkul, VP of policy and advocacy at Kids In Need of Defense. "So we want them to ramp up and make sure that they're providing post-release legal services and social services so that somebody has an eye on the kid after they're reunified to make sure that they're safe."

The Biden administration has put plans in motion to restart a program that would allow the minors who qualify to apply for asylum from their home country. Democrats have also proposed sending billions of dollars in aid to Central American nations to solve the root causes of migration. But even with a legislative remedy in the works some say these immigration patterns will continue.

"The situation is there and it's going to be there for quite a long time," Brown said. "And so I think we need to be realistic and we need to plan on how to manage migration and stop thinking that we can somehow prevent it."

Politically, border issues have been a weak point for the president, with recent polls showing only about a third of Americans think he’s doing a good job handling the surge.