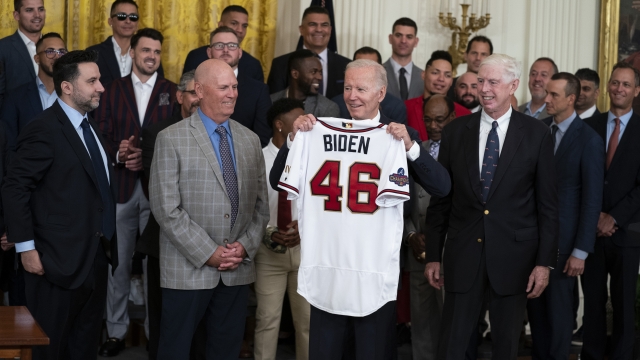 The Braves were joined by President Biden, who saluted the team's improbable season, calling it one of "history's greatest turnarounds."

President Joe Biden said Monday the Atlanta Braves will be “forever known as the upset kings of October” for their improbable 2021 World Series win, as he welcomed the team to the White House for a victory celebration.

President Biden called the Braves' drive an “unstoppable, joyful run.” The team got its White House visit in with just over a week left before the 2022 regular season wraps up and the Major League Baseball playoffs begin again. The Braves trail the New York Mets by 1.5 games in the National League East but have clinched a wildcard spot for the MLB playoffs that begin Oct. 7. Chief Executive Officer Terry McGuirk said he hoped they’d be back to the White House again soon.

In August 2021, the Braves were a mess, playing barely at .500. But then they started winning. And they kept it up, taking the World Series in six games over the Houston Astros.

“This team has literally been part of American history for over 150 years,” President Biden said. “But none of it came easy ... people counting you out. Heck, I know something about being counted out.”

Players lined up on risers behind the president, grinning and waving to the crowd, but the player most discussed was one who hasn’t been on the team in nearly 50 years and who died last year: Hall of Famer Hank Aaron.

Hammerin' Hank was the home run king for 33 years, dethroning Babe Ruth with a shot to left field on April 8, 1974. He was one of the most famous players for Atlanta and in baseball history, a clear-eyed chronicler of the hardships thrown his way — from the poverty and segregation of his Alabama youth to the racist threats he faced during his pursuit of one of America’s most hallowed records. He died in January at 86.

“This is team is defined by the courage of Hank Aaron,” President Biden said.

McGuirk said Aaron, who held front office positions with the team and was one of Major League Baseball's few Black executives, was watching over them.

"He'd have been there every step of the way with us if he was here,” McGuirk added.

The president often honors major league and some college sports champions with a White House ceremony, typically a nonpartisan affair in which the commander in chief pays tribute to the champs’ prowess, poses for photos and comes away with a team jersey.

Those visits were highly charged in the previous administration. Many athletes took issue with President Donald Trump’s policies and rhetoric on policing, immigration and more. Trump, for his part, didn’t take kindly to criticism from athletes or their on-field expressions of political opinions.

Under President Biden, the tradition appears to be back. He’s hosted the NBA champion Milwaukee Bucks and Super Bowl champion Tampa Bay Buccaneers at the White House. On Monday he joked about first lady Jill Biden's Philadelphia allegiances.

"Like every Philly fan, she’s convinced she knows more about everything in sports than anybody else,” he said. He added that he couldn't be too nice to the Atlanta team because it had just beaten the Phillies the previous night in extra innings.

Press secretary Karine Jean-Pierre was later questioned about the team’s name, particularly as other professional sports teams have moved away from names — like Cleveland, now the Guardians, and the Washington, now the Commanders — following years of complaints from Native American groups over the images and symbols.

She said it was important for the country to have the conversation. “And Native American and Indigenous voices — they should be at the center of this conversation,” she said.