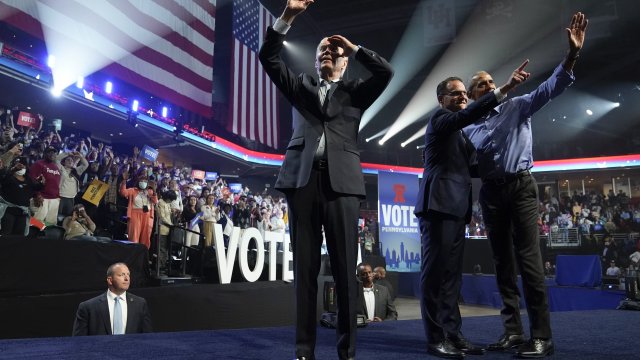 Three presidents descended on Pennsylvania this weekend, making a final push for their party’s Senate candidates in a race that could determine the balance of power in the upper chamber of Congress.

Fetterman — who is in a tight race with Republican candidate Mehmet Oz — is seen as Democrats' best hope of maintaining their majority in the Senate and keeping President Biden’s legislative agenda alive.

President Biden and Obama warned that Social Security, abortion rights and democracy itself were at stake.

On the other side of the state, former president Donald Trump held his own rally.

The dueling rallies also offered a preview of a potential 2024 rematch between President Biden and Trump, with the former president teasing another run for the White House.

But Trump and other Republicans have already begun to cast doubt on the results of the state’s election ahead of a potential victory for Fetterman.

Pennsylvania’s acting Secretary of the Commonwealth warned that it could take days to complete the vote count.

That’s largely because counties in the state can’t begin processing mail-in votes until the morning of the election.

In response, Doug Mastriano, the Republican candidate for governor, said in an interview “that’s an attempt to have the fix in."

However, many counties across the U.S. — including Republican counties — do not complete their vote counts on election night. Media outlets make projections based on incomplete data to determine the winners.