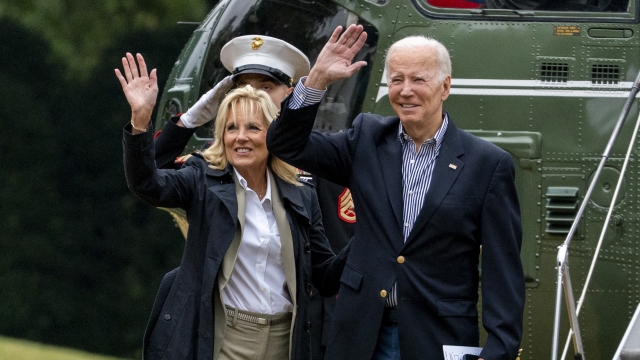 It will be the Bidens' first time welcoming trick-or-treaters as president and first lady.

President Joe Biden and his wife, Jill, on Monday were hosting the children of local firefighters, nurses, police officers and National Guard members for trick-or-treating at the White House on Halloween. But it was shaping up to be a soggy affair.

Rain fell Monday morning in Washington and showers were forecast for throughout the day.

It will be the Bidens' first time welcoming trick-or-treaters as president and first lady. They were in Europe for Halloween last year, their first in the White House. Instead, they had the Pennsylvania Avenue side of the executive mansion lit up in orange for the spooky holiday.

Scores of costumed children on Monday were expected to stream through the gates to the south side of the White House, where President Biden and his wife will hand out treats.

The Why: Halloween Special

All your spooky Halloween questions, answered.

The White House has not said what will be in the goodie bags. In past years, trick-or-treaters have received little boxes of presidential M&Ms and-or a White House-baked cookie. Michelle Obama added dried fruit in her quest to help children eat more good-for-you foods.

Several Cabinet departments and agencies will also participate, including the Education and Transportation departments, along with NASA, the U.S. Secret Service, the Peace Corps, the White House Fire Brigade and the White House Military Office.

Mamie Eisenhower decorated the White House for Halloween for the first time in 1958. Photographs of costumed children in the Oval Office — President John Kennedy's kids Caroline and John Jr. — emerged during that administration.

Since then, first families have celebrated Halloween by hosting trick-or-treaters or throwing parties for friends and White House staff. Larger events have been held on the grounds, especially by families with younger children, such as Amy Carter, Chelsea Clinton and Malia and Sasha Obama.

President Richard Nixon went big for Halloween, hosting a series of public events for local children. In 1969, the Pennsylvania Avenue entrance was turned into the mouth of a 17-foot tall pumpkin. Visitors walked past two witches stirring cauldrons after they entered.

President Ronald Reagan and his wife, Nancy, were greeted by a pumpkin on a table that was carved with the slogan, "Stay the Course." The midterm elections were the next day, Nov. 2.

President Bill Clinton and his wife, Hillary, held annual combination costume and birthday parties for friends and staff because the first lady's birthday fell on Oct. 26. In 1993, they showed up at the party dressed as President James Madison and first lady Dolley Madison.