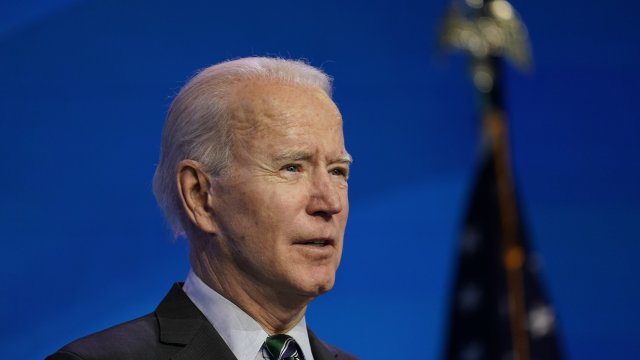 SMS
Biden To Roll Back Trump Admin. Decisions On Day One
By Bailey Vogt
By Bailey Vogt
January 17, 2021
Biden will move to rejoin the Paris climate accord and roll back immigration restrictions from Muslim-majority countries.
SHOW TRANSCRIPT

Hours after his inauguration, President-Elect Joe Biden will begin his agenda day one.

That's according to his incoming chief of staff, Ron Klain.

He said in a memo to staff that Biden will undo controversial Trump administration policies and enact coronavirus protections.

In his first hours, Biden will move to rejoin the Paris climate accord and roll back immigration restrictions from Muslim-majority countries — both enacted by President Trump.

He will also require mask wearing on federal property and during interstate travel. Additionally, he'll extend a freeze on student loan payment and interest and renew protections against foreclosures and evictions.

And that's just day one of a reported ten-day policy marathon.

Day two and three will see expanded virus testing, plans to reopen schools and businesses and provide economic relief for those struggling through the pandemic.

In the days to follow, Klain said Biden will make moves to address climate change and criminal justice reform. He will also expedite the process of reuniting families separated at the U.S.-Mexico border — among other immigration policies.

Incoming White House Communications Director Kate Bedingfield confirmed parts of this agenda on ABC Sunday: "You're going to see him move on promises he made on the campaign trail to ensure we are focused on workers. you'll see him make good on his by American promise. you're going to see him toward a more just and racially equitable society."