How Biden's Low Approval Among Voters Is Shaping Midterm Races 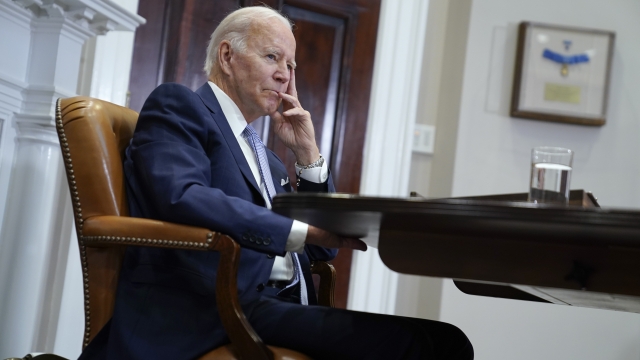 Following a series of legislative wins in recent weeks, President Joe Biden will soon hit the road to tout what the White House and Democrats see as major accomplishments in the first half of his term.

"I'm about to sign the Inflation Reduction Act into law, one of the most significant laws in our history. Let me say from the start with this law, the American people won, and the special interests lost," said President Biden.

But the big question is, will it be enough to push back political headwinds and the president's low approval ratings to propel Democrats to success this fall?

"We know historically the party that's in power, as represented by which party is in control of the White House, tends to lose seats and emerge from elections. So, Democrats are bracing to lose seats in the House and in the Senate," said Andra Gillespie, an associate professor at Emory University.

While the president has seen his popularity increase slightly in recent weeks, his standing among voters is still at historic lows, and it could drag Democrats down with him this November. 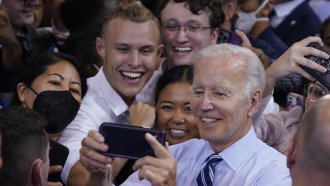 But some in the president's party now see a rare silver lining after President Biden signed major legislations on things like infrastructure, gun reform and, more recently, the Inflation Reduction Act, which Democrats say will reduce greenhouse gas emissions and lower health care costs for Americans.

"We've done a lot. Have we done everything? But we've done enough. More so than any other president in modern day history. And when you look at what Joe Biden has accomplished, legislative-wise and policy-wise, that's number one," said Antjuan Seawright, a Democratic strategist.

Democrats are in part focusing their message on abortion rights and legislative wins, while Republicans work to seize an opportunity to attack the president's record amid historically high inflation.

Republicans say voters are just ready for a change.

"We're working incredibly hard. Republicans, the RNC, our sister committees. We are not taking a single thing for granted. We know that Americans are struggling under Biden's failed administration," said RNC Communications Director, Danielle Alvarez.

Both Republican and Democratic National Committees boast an army of volunteers and operatives aimed at motivating key groups of voters in states that could decide which party controls congress.

"There are very few persuadable people in the electorate right now. Most people probably have a good idea of whether or not they're voting for Democrats versus Republicans in the election. The bigger issue for Democrats is to make sure that they mobilize as much as possible. And this is true for Republicans as well," said Gillespie.

Republicans say they have opened more than 35 community centers across the nation in the past year to reach out to minority groups to increase support ahead of the midterms. While Democrats say they have invested in their ground game by hiring staff in key states, and they plan on blasting their message in part through ad campaigns both nationally and in key states.