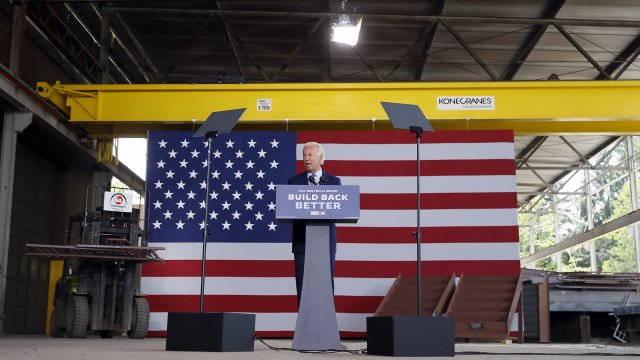 Presumptive Democratic nominee Joe Biden says he's going to be the president who brings back jobs — both those lost due to the coronavirus and those sent overseas.

In a plan unveiled Thursday at a metal works facility in Pennsylvania, the former vice president says he wants to spend $700 billion on research and American products. The proposal is America-centered — in some ways, similar to President Donald Trump's economic message — and moves away from Biden's history of support for the North American Free Trade Agreement and the Trans-Pacific Partnership, negotiated during the Obama administration.

These trade deals are not popular among progressives, including former rival Bernie Sanders and his supporters. The announcement comes after allies of Biden and Sanders unveiled a list of policy recommendations on topics including climate change, education, health care and criminal justice reform.

The 110-page proposal written by dozens of prominent Democrats pushes the Biden campaign further to the left on climate, setting a goal of achieving net-zero greenhouse emissions and creating a 100% clean building sector. It establishes universal pre-K and makes college free for students whose families earn less than $125,000. The task force stopped short of calling for "Medicare For All" and instead supported Biden's goals of building on the Affordable Care Act. It also adopted much of the House Democrats' proposals for reforming policing and supported Biden's position on decriminalizing marijuana.

As more than 1 million more Americans filed for unemployment last week, Biden's speech underscores how big of an issue the economy remains this election, and not just for President Trump.

Biden has limited his campaign travel mostly to Pennsylvania, a key battleground state that is a short trip from his home in Delaware. Vice President Mike Pence also traveled to the state Thursday for a business roundtable, a fundraiser and a meeting with Philadelphia police officers.