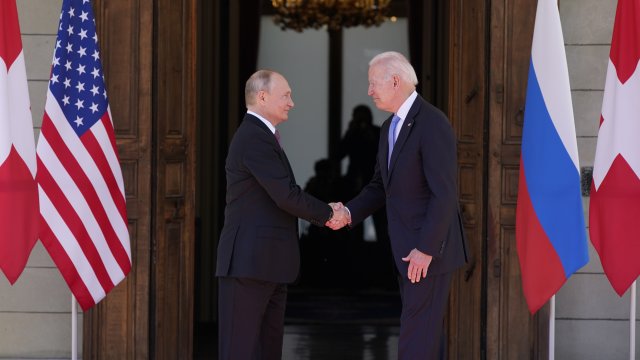 In his highly anticipated meeting with Russian President Vladimir Putin, President Joe Biden said the U.S. and Russia can get back to having a stable and predictable relationship.

"We should be able to cooperate where it's in our mutual interest. And where we have differences, I want President Putin to understand why I say what I say and why I do what I do," said President Biden.

President Biden and Putin met in Geneva, Switzerland, Wednesday, where the leaders covered topics ranging from the COVID-19 pandemic, a weapons treaty and Ukraine. But cybersecurity was a major point of discussion.

Putin did not accept responsibility for recent cyberattacks in the U.S., but President Biden said he was clear about the consequences if ransomware from Russia hits the U.S. again.

"I pointed out to him we have significant cyber capability, and he knows it. He doesn't know exactly what it is, but it's significant. And if, in fact, they violate these basic norms, we will respond cyber-ly," said President Biden.

During his solo press conference following the summit, Putin called the meeting "constructive" and said both sides showed a willingness to understand one another.

"Bottom line is, I told President Putin we need to have some basic rules of the road where we can all abide by, " said President Biden.

Diplomatic relations between the U.S. and Russia have been strained, so the summit wasn't expected to result in large or sweeping new agreements. The one agreement the two leaders did strike was a decision to allow each country's ambassadors return to their posts.