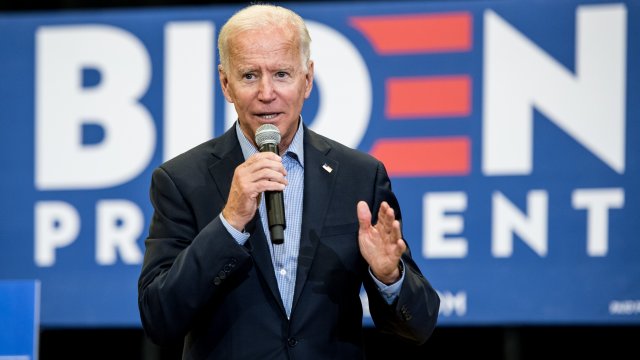 Former Vice President Joe Biden says recent comments made by Iowa Sen. Joni Ernst reveal why Republicans have dragged him into President Trump’s impeachment: They believe he can defeat the president in a general election match-up.

Iowa caucuses, folks. Iowa caucuses are this next Monday evening and I’m really interested to see how this discussion today informs and influences the Iowa caucus voters, those Democratic caucus-goers. Will they be supporting Vice President Biden at this point?

She spilled the beans. She just came out and flat said it. You know the whole impeachment trial for Trump is just a political hit job to try to smear me because he is scared to death to run against me and he has good reason to be concerned.

Biden has found himself at the center of President Trump’s impeachment. The president and some Republicans have claimed that Biden acted inappropriately when he called for the removal of a Ukrainian prosecutor that was allegedly investigating Burisma, a Ukrainian natural gas company for which the vice president’s son, Hunter, sat on the board.

Well I would think that if they were honest about it, they'd start a major investigation into the Bidens.

Some Senate Republicans have said they want Biden or his son to testify in the impeachment trial, while Senate Democrats have accused the GOP of attempting to smear Biden to bolster its defense.

I don’t think we should be measuring the impeachment articles and their veracity, their truth and whether they should be taken seriously on the impact it’s going to have on an Iowa caucus voter.