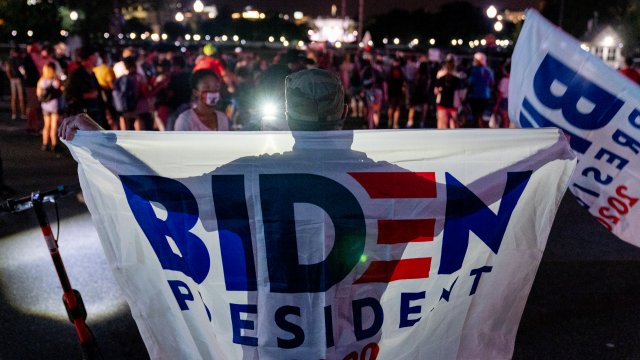 With the conventions now behind us, the general election race is officially on. Joe Biden heads into the fall with most polls showing a comfortable lead nationally over President Donald Trump and running ahead narrowly in many swing states. Democrats say they aren't taking the polls for granted after 2016. Ohio Senator Sherrod Brown, who represents one of the most important swing states, says Biden needs to stay on message for the next 60 plus days.

Biden and his vice presidential pick Senator Kamala Harris have built a broad coalition of support, anchored by minorities, women, young people, even some Republicans.

Former GOP Senator Gordon Humphrey, who left his party after Trump's win in 2016, supported Biden in the primary and is now endorsing him in the general. He says the ticket needs to continue to make it clear that Biden is a centrist to get those moderate voters in places like his home state of New Hampshire.

"President Trump is trying to paint Biden as a leftist. He's not, I know him, he's not. He's a centrist and he's making that clear as well. He's more than appealing to Democrats and a great many independents and even some Republicans who are disappointed in President Trump," Humphrey said.

He joins nearly 3 dozen former members, more than 100 former John McCain staffers and nearly three dozen Romney campaign staffers who feel institutional party values have been exchanged for the president's brand of conservatism. Still President Donald Trump, despite his poll numbers, enjoys enthusiastic backing from the GOP base. But polls show he is struggling with female voters, specifically white women, a key voting block he won four years ago.

"I think if President Trump and the RNC is trying to get those suburban housewives back, they have to recognize which portion of that subset of that group is going to be most susceptible to his messaging," said Republican strategist Joe Pinion.

The president's campaign is looking for multiple pathways to 270 electoral votes that defends the 2016 map and expands it by flipping states like Minnesota, New Hampshire.

The Biden campaign is considering trips to key battleground states after Labor Day. President Trump traveled to New Hampshire the day after the GOP convention. And the calendar ahead is a busy one-- debates--begin September 29th and there will be one per week through October 22nd.  And in another sign of just how quickly the election will be here -- Americans in some states can begin voting as early as mid-September.