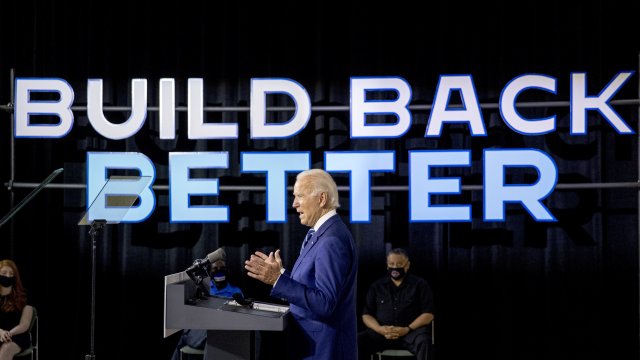 Presumptive Democratic nominee Joe Biden says if he becomes president, he's got a plan to help families care for their children and elderly relatives.

The $775 billion proposal unveiled Tuesday includes $450 billion specifically for elderly care. His campaign says the plan will create millions of additional jobs, including adding 150,000 community health care workers. It also would take a stab at easing the burden of care overall. Right now, the Wall Street Journal says upwards of 1 million people are in line for in home- and community-based services through Medicaid.

The former vice president is also proposing $325 billion to help with child care and create universal pre-K for 3- and 4-year-olds. His plan would create new child care facilities across the country, including in rural areas and at workplaces. It would offer tax credits to help low-income families pay for that care.

Katie Hamm, who focuses on early childhood policy at the progressive Center for American Progress, says investing in early education could help bridge the achievement gap for students.

"We have this interesting history in our country where when a child turns 5 and they go to kindergarten, we say, yes, this is a public investment, a public good. We don't consider those before 5 years a public good, but we actually know now that those are really hugely important developmental years," Hamm said.

"If our K-12 system were just doing amazingly well, then if we want it to expand it younger and younger, that would make a great deal of sense. But given its poor track record, especially with disadvantaged children, it just doesn't make any sense to me that our our go-to idea would be expanding it younger," Stevens said.

She says the proposed tax break for families would be better utilized to help parents stay home.

Biden, at one point a single parent himself, empathized with what millions of parents and caretakers are going through amid the pandemic.

The plan also includes pay raises for care industry employees, many of whom are women and people of color. It would put them on par, salary-wise, with K-12 teachers.

The Biden campaign didn't say too much about how the plan would be funded except to ensure wealthy Americans are paying their taxes and rolling back tax breaks for real estate investors. The Trump campaign said the plan was nothing more than a tax hike.

This is the third pillar of Biden's Build Back Better Plan to mobilize American workers through revitalization in manufacturing, infrastructure, clean energy and now family care.