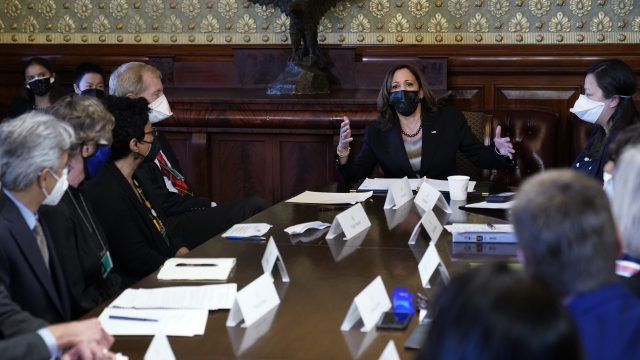 The White House is zeroing in on a package of clean energy strategies for President Joe Biden's big domestic policy bill that officials believe could reach similar greenhouse gas emission reduction goals as an initial proposal that was quashed by opposition from a centrist Democrat.

The Biden administration discussed the proposals Monday at the White House with the leaders of about a dozen environmental and justice groups, according to a senior administration official who requested anonymity to share the plans. A new approach was needed after coal-state Sen. Joe Manchin, D-W.Va., rejected the White House's earlier clean energy plan.

The emerging proposals would expand grants and loans in the agriculture and industrial sectors to help them shift to clean energy providers with fewer greenhouse gas emissions that contribute to global warming, the official said. There would also be new, refundable home improvement tax credits for tapping solar and other renewable energy sources. The official said momentum was building as the group coalesced around the new ideas.

The new strategies come as the president and Democrats in Congress are struggling to wrap up talks on President Biden's now-scaled-back package of at least $1.75 trillion in social services and climate change investments before he departs later this week for two global summits overseas.

Vice President Kamala Harris visited the afternoon meeting with the leaders of some of the nation's leading environmental and justice organizations and reiterated the president's commitment to the goals of the package — even as she acknowledged the sometimes grueling process to achieve consensus in the party.

A cornerstone of President Biden's climate change strategy had been a clean energy plan that would have rewarded power providers that use clean sources and penalized those that don't.

But that approach had to be scrapped when Manchin objected. With Republicans fully opposed to President Biden's big package, the president needs the support of all Democrats in the 50-50 split Senate, with no votes to spare.

Instead, officials are coalescing around a new package of strategies that could potentially achieve similar emission reduction goals without adding new costs to the overall package.

A plan backed by Democrats offers tax credits and spending to boost renewable power such as wind and solar and sharply increase the number of electric vehicles. Advocates think the plan, plus executive branch action such as a pending Environmental Protection Agency rule to curb methane emissions, and action by states, should be enough to meet or nearly meet President Biden's goal to cut greenhouse gas emissions in half by 2030, compared with 2005 levels.

President Biden said at a town hall last week that he expects to spend the $150 billion that had been targeted for the clean-energy program on climate programs. Advocates say the money would most likely be used as block grants to states to pursue their own emissions cuts.

It's unclear if the new proposals would be acceptable to Manchin, whose home state is a leading producer of coal and natural gas. He has preferred an approach that does not favor one industry over the other as coal begins to be phased out for cleaner energy sources.

The new strategies appear to use more incentives to encourage clean energy use rather than penalties for failing to make the transition, which could help win over Manchin. But climate change advocates have argued that penalties are needed to get industries to more quickly turn to cleaner sources as the world races to confront the dire threats of climate change.

A major fight emerged in recent days over a proposal to include a so-called "methane fee" in the budget package. The fee would be imposed on energy companies that leak methane pollution during oil and gas production. Methane, the main component of natural gas, is a leading cause of global warming, especially in the short term.

"My hope is, it's going to be in," Sen. Tom Carper, D-Del., chairman of the Senate Environment and Public Works Committee, said of the methane fee.

"We negotiated a methane fee, we tried to do it in a way that Sen. Manchin and his folks would be more receptive of, and we're still talking about it and continuing to work through it," Carper told reporters Monday.

Manchin said Tuesday he is talking to Carper and others about the methane fee, but does not want to "punish" energy companies "just for the sake of punishing" them. Some House Democrats from Texas also oppose the methane fee, saying it could cost thousands of jobs in the energy industry and increase energy costs for Americans.

Supporters called the fee a common-sense provision that only kicks in when methane pollution exceeds agreed-upon targets. The fee would give the oil and gas industry a financial incentive to capture methane rather than burn or "flare" excess gas produced at well sites, supporters say.

Sen. Sheldon Whitehouse, D-R.I., said a methane fee is crucial to meeting President Biden's climate goals as he heads to a climate summit in Glasgow, Scotland next week.

"Letting corporations pollute for free is not a climate solution," Whitehouse said.

The grants and loans for the agricultural sector would help rural electric cooperatives transition to cleaner energy sources, which could be of interest to Manchin in his rural state.

Similarly, industrial steel, cement and aluminum plants could tap funds to beef up their use of greener sources, the official said. There would also be expanded home improvement tax credits.

President Biden wants a deal in hand before he arrives in Scotland for the United Nations climate conference amid hopes to reposition the U.S. as a world leader on the issue.