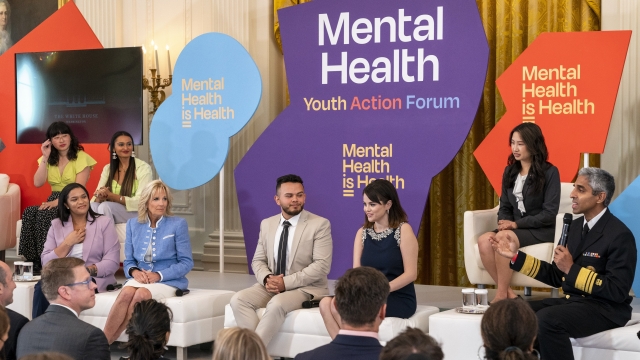 In his first State of the Union address, President Joe Biden called on Americans to come together to confront the nation’s mental health crisis.

"Let’s get all Americans the mental health services they need. More people they can turn to for help, and full parity between physical and mental health care," said President Biden.

Since then, the White House has taken steps to direct more funding to mental health resources and raise awareness around the issue, enlisting celebrities like singer Selena Gomez to help.

"I've tried everything to escape this feeling, so why pretend that I have it all put together?" said Gomez.

The Biden administration recently took the next step and released its roadmap to achieve its ultimate goal — behavioral health integration.

"The goal is to be able to have, you know, whether it be social workers or psychologists, integrated into primary care settings, so that they're within that practice, there are individuals who can address behavioral health directly," said Miriam Delphin-Rittmon, the assistant secretary of the Substance Abuse and Mental Health Services Administration.

It outlines three strategic pillars aimed at merging mental and physical health services so that patients can receive holistic care.

"For example, an individual with a cancer diagnosis and going through cancer treatment, it’s not unlikely that they would find themselves at some point in their treatment depressed and ignoring the fact that they are depressed at a time when they are vulnerable and receiving treatment can have detrimental effects on their overall health," said Shawn Coughlin, president and CEO of the National Association For Behavioral Health Care.

And there’s one step the Biden administration is pursuing that mental health experts say could incentivize that integration.

Doctors use billing codes to document services they provide for a patient and to signal to Medicare, Medicaid and insurance companies what treatments they need to reimburse.

The new CMS rule would create new billing codes that psychologists and social workers can use to bill for treatment they give a patient as part of their primary care.

Experts say the additional codes will make it easier for Americans to access mental health services.

"Having more codes is really important because it opens up the doors to do the kinds of activities and have the kinds of conversations you need to have to really help someone get better," said Jared Skillings, chief of professional practice, at the American Psychological Association.

But the new billing codes would only be eligible for reimbursement through Medicaid and Medicare, which experts say already isn’t paying very well.

"The Medicare program is probably the worst payer in the mix," said Coughlin.

"If you have a psychologist who is reimbursed a whole lot more money for doing certain kinds of activities, they're far more likely to do more of the activities that get paid more for. And it's not because they're trying to be selfish. It's because the mental health reimbursement right now is so bad that they're simply trying to keep food on the table," said Skillings.

But Skillings and Coughlin say expanding billing codes is a good first step, and they hope that it won’t be long before all insurers begin doing the same thing.

"They need to listen to this administration that the integration of mental and physical health is really important and to take that very seriously," said Skillings.