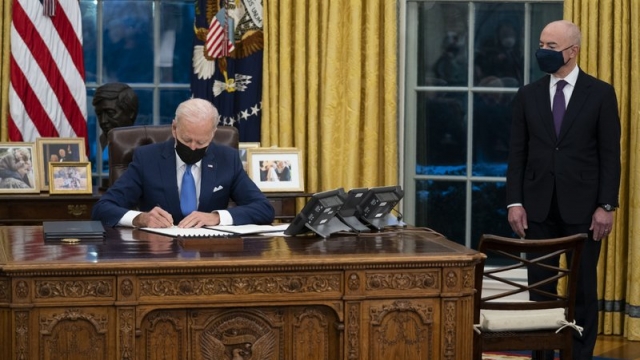 SMS
Biden Administration Grapples With Surge Of Migrant Children At Border
March 7, 2021
Feds direct facilities caring for migrant children in the U.S. they can open back up to pre-pandemic levels to handle crush of kids, families.
SHOW TRANSCRIPT

The Biden Administration is racing to find space for a growing number of families and unaccompanied children attempting to cross the southern border. A memo shows the administration has notified facilities caring for migrant children in the U.S. they can open back up to pre-pandemic levels because of the rising number of migrants crossing the border. This week, Father Roy Snipes has welcomed about a hundred migrant families a night to seek shelter in this South Texas church overflowing from another shelter down the road. No longer are migrant children being separated from their parents. These families are allowed to wait in the United States for their asylum cases to be heard in court.

We met 21-year-old Kenia —  the shelter asked that we protect her identity. She left Honduras two weeks ago with her son and crossed the Rio Grande into the U.S. a few nights before.

Why did she come now?

"I heard there were going to be opportunities," said Kenia.

Many migrants are still being turned away at the Southern border. But the growing reality for the Biden administration is that there’s a perception in Central American countries ravaged by crime and natural disasters that its now easier to make the journey north and cross the border. Homeland Security Secretary Alejandro Mayorkas insists this isn’t a crisis but a challenge.

"We are working as hard as we are not only in addressing the urgency of the challenge, but also in building the capacity to manage it, and to meet our humanitarian aspirations in execution of the President's vision," said Mayorkas.

The numbers of migrants arriving at the southern border is growing. In January, customs and border protection reported about 7,500 families were taken into custody and 5,800 unaccompanied children. During a major surge exactly two years ago, border patrol encountered 5,500 children in one month.

The Department of Health and Human Services told facilities to open bed space for minors to pre-pandemic levels, which is just under 14,000. There are now about 7,700 children under HHS care and the concern is that number will rise quickly in the coming weeks.

Now some Texas Democrats are warning the Biden team about what’s unfolding.

At the same time, activists are also pressuring President Biden to undo what they see as damage from the Trump administration.

"People that are willing to give them a break in the beginning, but I think that break will soon be over if they don't move very quickly," said ACLU lawyer Lee Gelernt.

In the south Texas shelter, several migrants told us they saw many children traveling to the border alone.

How old were these children that you saw?"

They would act like they were part of another family to protect themselves?

Some 108 migrants have tested positive for the coronavirus in the Brownsville, Texas, area since the end of January. Local officials and charities are testing the migrants. Hotel space is being provided to those who test positive. Also, city officials say they have gotten a lot of false positives.