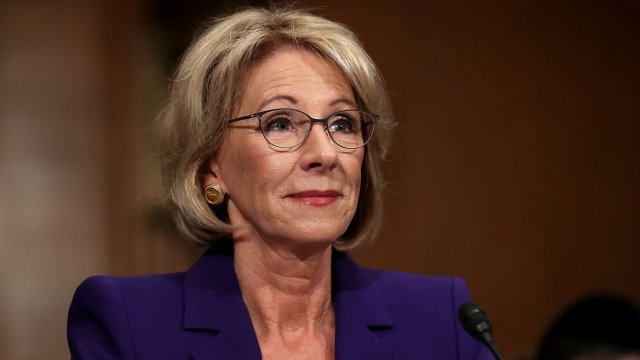 Education Secretary Betsy DeVos has proposed rules that would make it harder for college students who have been defrauded to get their federal loans erased.

The proposal would get rid of loan forgiveness policies created by the Obama administration. It would eliminate an estimated $13 billion in planned loan relief over the next decade.

Critics of the proposal say it will help for-profit institutions instead of students. A lawyer for the Consumers Union advocacy group told The New York Times, "The Department of Education is turning a blind eye to widespread fraud and abuse at for-profit schools that left thousands of students in debt without a meaningful education."

Under the proposed rules, it would fall on the student to prove their school knowingly defrauded them. It also would let schools force students into arbitration agreements that bar them from suing.

DeVos says the proposal lays "clear rules of the road for higher education institutions to follow" and will keep taxpayers from paying for "unreasonable or unsubstantiated claims of fraud."

The Obama administration began making it easier for students to seek debt relief after two for-profit colleges defrauded students out of millions of dollars.