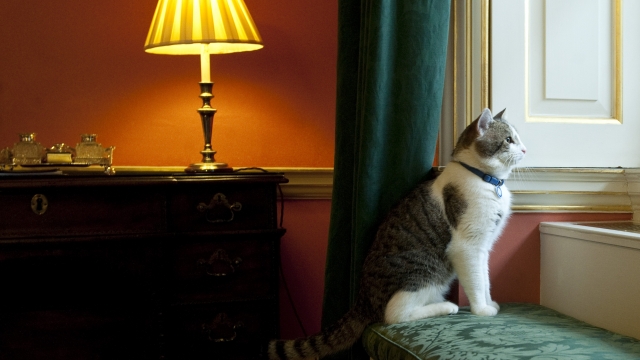 This is Larry — the U.K.'s Chief Mouser to the Cabinet Office. We're not joking: That's the cat's actual title. He's a bit of a legend, and that's why he's staying put at 10 Downing Street, even as David Cameron moves out.

Incoming Prime Minister Theresa May will be the new resident of the house. And Larry's continued stay should help provide some symbolic stability post-Brexit.

SEE MORE: Looks Like The Brexit Problem Will Be A Woman's Job To Solve

He was brought to live at 10 Downing to deal with a rodent problem after a rat was seen scurrying across the front steps of the residence during a live BBC broadcast.

In addition to "contemplating a solution" to the rodent problem, he's also responsible for "greeting guests to the house, inspecting security defenses and testing antique furniture for napping quality."

Conservative members of Parliament moved quickly to find a replacement for Cameron, but Larry's stayed tight-lipped about May. But let's not assume May's penchant for leopard-print footwear is lost on the feline.