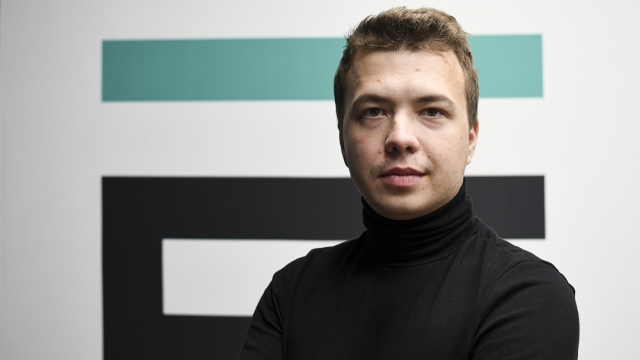 SMS
Outrage After Belarus Regime Forces Plane Landing To Arrest Journalist
By Sasha Ingber
By Sasha Ingber
May 24, 2021
European officials are describing the incident as an act of state terrorism and weighing sanctions, while airlines avoid flight paths over Belarus.
SHOW TRANSCRIPT

Shock, outrage, and condemnation after Belarusian President Alexander Lukashenko apparently greenlit a false bomb threat to divert a passenger plane -- all to arrest an exiled journalist on board.

Ryanair Flight 4978 was flying north on Sunday from Greece to Lithuania when the pilots were ordered to turn east and land in Belarus’ capital, Minsk. Joining them on the ride? A Mig-29 fighter jet. Belarus’ state-owned news agency says Lukashenko “personally” ordered the landing.

"It constitutes a brazen affront to international peace and security by the regime. We demand an immediate, international, transparent and credible investigation of this incident,” says White House press secretary Jen Psaki.

Secretary of State Antony Blinken says the forced detour “endangered the lives of more than 120 passengers, including U.S. citizens.” And he’s among many leaders calling for the release of the arrested journalist, 26-year-old Raman Pratasevich.

In Europe, officials are describing the incident as an act of state terrorism and weighing sanctions, as airlines begin avoiding flight paths over Belarus.

"The airspace of Belarus is unsafe for everyone," says Minister of Lithuania, Ingrida Simonyte.

Initially, Ryanair said the plane diverted because of a "potential security threat onboard." But nothing was found. The CEO saying Monday he believes Belarusian KGB agents had been on the flight.

Now, fears that any person from any country could be in danger flying over the landlocked country.

"We all are shocked, and for us it means that nobody feels safety now, even abroad and even on flights. And also it means that Lukashenko regime remembers everything -- Lukashenko will come to you and knock to your door," Olga Karatch, a Belarusian opposition activist and civic leader, tells Newsy.

Arrested journalist Pratasevich is the co-founder and former editor of a popular opposition platform that supported demonstrations against President Lukashenko, in power since 1994. Months ago, Pratasevich warned Belarus categorized him as a terrorist. Now, he could face the death penalty.

Video on Monday from pro-government channels shows him in custody confessing to “plotting riots,” but it’s likely a forced confession. He appears to have bruises on his head.