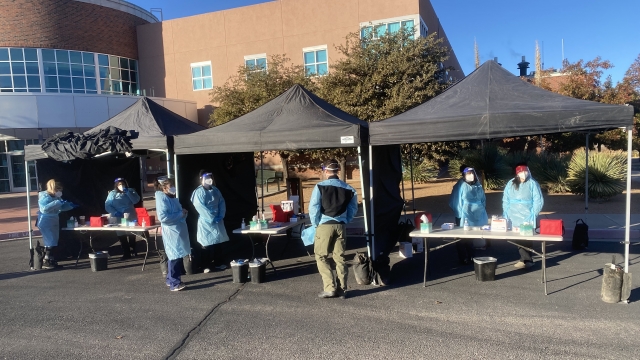 SMS
Behind The Scenes Of Keeping Film And TV Productions COVID-Free
By Casey Mendoza
By Casey Mendoza
January 5, 2021
Newsy talked with health care workers about what goes into ensuring on-set safety.
SHOW TRANSCRIPT

With a surge of COVID cases in California, an outbreak at a Hollywood studio, and one A-lister's leaked outburst about social distancing, TV and film industries seem to be struggling to adapt to the challenges of the continuing pandemic.

Demerie Danielson is a nurse and COVID compliance officer for film and TV sets in New Mexico. Her position didn't exist until this summer, but now it's a mandatory part of live-action productions all over the country.

Danielson: "We're going into their world. We're shaking everything up and making it a whole different, you know, something totally different for them. … It can be anything from like a small production, from seven to 10 people all the way to 800 people."

Danielson's duties include training workers on health guidelines, overseeing testing, establishing a zone system, enforcing social distancing and even stopping productions in the event of a breach.

Johonniuss Chemweno, founder and CEO of VIP StarNetwork: "The COVID Compliance Officer is somebody that has a very strong and diverse background, maybe not specific to only health care."

Johonniuss Chemweno founded VIP StarNetwork in 2018 to provide health care services to live-action productions. When the pandemic hit, it was an easy pivot to include coronavirus compliance measures — but not every company has that same level of experience.

Last fall, a SAG-AFTRA executive told The Los Angeles Times that a medical background was preferable, but "not an absolute requirement." That lack of standardization is a concern for many in the industry.

This issue was highlighted back in December when an outburst from actor Tom Cruise was leaked by The Sun.

Tom Cruise: "We are not shutting this f------ movie down! … Do you understand the responsibility that you have?"

That same month, Variety reported that one CBS Studios lot — where shows like "Mythic Quest," "Why Women Kill" and "Call Your Mother" — had an outbreak of 41 cases.

Chemweno: "I wouldn't say it's just Tom Cruise. I think, you know, we see that across all productions. Everybody from what we've been involved in is concerned with people falling protocols and procedures."

Danielson: "To have that weight on your shoulders, if somebody were to be sick, hospitalized, or even, in the worst case, pass away, that's a horrible thing to carry on your shoulders. So I can see that passion behind wanting to make sure that people stay safe."