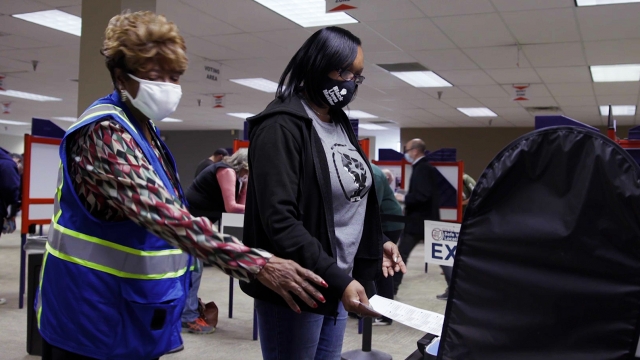 While scores of volunteers around the country have answered the call to help staff polling places this election during a pandemic, at least three pivotal states are still looking for more backup poll workers.

“Someone who attends training, knowing and being willing to go anywhere in the county that may need them on Election Day,” said Sherry Poland, director of the Hamilton County Board of Elections in Ohio. “Our plan is to train above and beyond the minimum number required at the polling place.”

Hamilton County still needs 97 people to reach its goal of 3,378 poll workers to ensure lines move quickly, according to the Ohio secretary of state’s tracking website.

Ohio is among three battleground states Newsy found is still looking to fill their pools of reserve poll workers.

In Pennsylvania, Philadelphia has 581 vacant positions.

Wisconsin is looking for 192 people willing to work.

“Even though in the grand scheme of things I think it’s a small number and I think we’ve come a long way, I still think we need to do what we can to support especially those small communities,” said Meagan Wolfe, administrator of the Wisconsin Elections Commission.

Officials are worried election employees will call in sick as COVID cases spike.

And this year many first-time poll workers are replacing older, experienced staff sitting this one out to avoid the virus.

“Broadly speaking I would say it’s still a concern,” he said. “I’m sure you’ve seen these pictures and scenes of folks waiting hours and hours and hours in lines. The number of poll workers has a direct effect on the length of a line.”

Arizona, Florida, Michigan, Minnesota, and North Carolina are swing states that told Newsy they were not aware of any remaining need for poll workers.

It’s also possible huge numbers of people voting by mail or voting early will actually mean many more poll workers will be on hand than actually necessary.

“We just don’t know exactly what Election Day is going to look like,” LaRocca said.

In Ohio, the state goal is one extra poll worker for every two needed at a minimum.

“We're pretty much there at our goal,” Poland said.