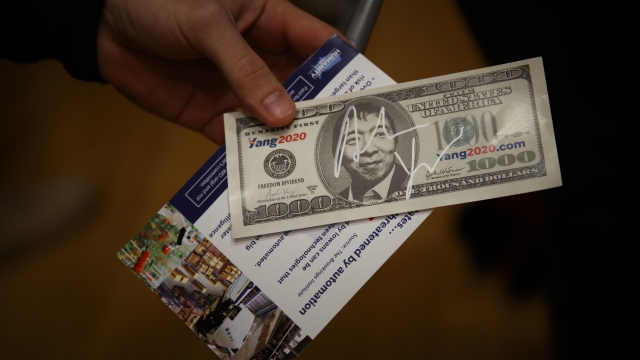 ["You know I'm the math guy, and it is clear from numbers that we are not going to win this race."]

Entrepreneur Andrew Yang's bid for the Democratic presidential nomination is over, but his signature proposal for a universal basic income — which he called the "Freedom Dividend" — may yet survive.

A universal basic income, or UBI, guarantees a set amount of money for every citizen in addition to their earned income. It's meant to combat income inequality and strengthen the social safety net.

Yang's plan would have offered $1,000 per month to every U.S. citizen over the age of 18. And while policymakers and economists had long debated the viability of UBI programs, support for them in the U.S. is reportedly on the rise.

In September 2017, two months before Yang filed to run with the Federal Election Commission, a Politico/Morning Consult poll found 43% of registered voters supported the idea of a basic income. Two years later, the number was 49%, according to a national Hill-HarrisX poll. That same survey found that from February to September 2019, support among Democrats jumped from 54% to 66%, while support among independents rose to 48%.

So, could those numbers convince the remaining Democratic candidates to take up the "Yang Gang's" flagship issue?

"It's really going to take a candidate speaking directly about cash coming back into the hands of people instead of going back into services that may be distributed from the government," said James Felton Keith, a Democratic congressional candidate for New York's 13th District and former Yang campaign adviser.

Keith said UBI has brought "a lot of people together" from across the political spectrum, and that there is "a lot of overlap" between Yang and other candidates, particularly front-runner Sen. Bernie Sanders.

"We all agree that education is infrastructure, it's not a service. Health care is infrastructure, it's not a service. Climate is the No. 1 issue," he said. "But really, the way that you pay for that, the way you fuel that is where I hope another candidate will go and say, 'We can fuel that activism via a universal basic income' — and make the universality of it something that almost comes off as spiritual."

Stacey Rutland is the co-founder of Income Movement, an organization advocating for UBI. She said it's important for supporters to remain vocal about the policy if they want candidates to view it as a viable platform.

"What we're doing and what we're kind of mobilizing to do right now is just that: to help bring the Yang Gang energy into the larger grassroots movement for basic income," said Rutland. "And over the next few months, we anticipate that that's going to grow and grow, and become no longer necessarily tied to any single one candidate but to the larger social justice movement that is really is required with where our economy is at this moment."