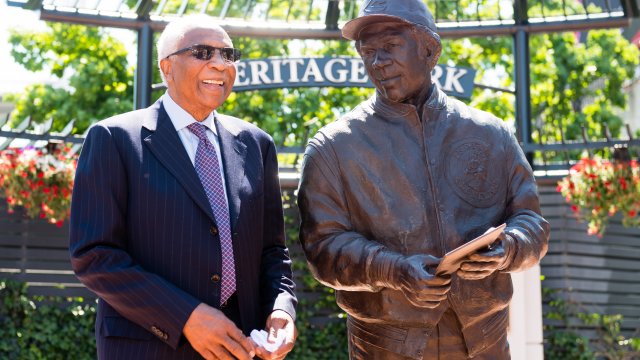 SMS
Baseball Legend Frank Robinson Has Died At 83
By Nathan Byrne
By Nathan Byrne
February 7, 2019
In addition to being MLB's first African-American manager, Robinson was the first player to win MVP honors in both leagues.
SHOW TRANSCRIPT

The barrier-breaking Robinson managed four teams in 16 seasons, starting with a home run as a player-manager for the Cleveland Indians in 1975.

Robinson was awarded the Presidential Medal of Freedom in 2005 for his civil rights efforts fighting housing discrimination in Baltimore.

As a player, Robinson was the first to win the MVP award in both the American and National leagues. He also won the 1966 Triple Crown award for leading the American League in batting average, home runs and runs batted in.

The 14-time all-star played for five teams in 21 seasons. Three of those teams have retired his number and put up statues in his honor.