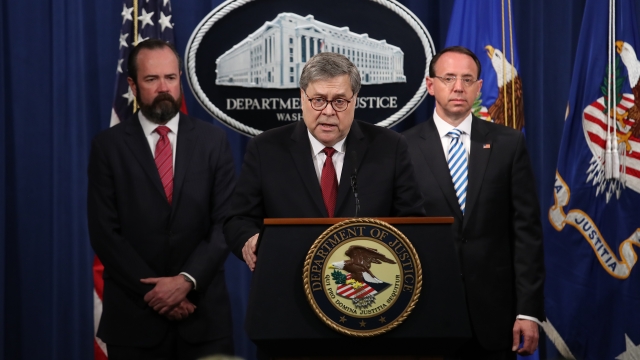 Attorney General William Barr set the stage for the public release of the Mueller report.

In a press conference Thursday morning, Barr summarized the report's conclusions and repeatedly emphasized there was no collusion by the Trump administration.

"So that is the bottom line. After nearly two years of investigation, thousands of subpoenas, and hundreds of warrants and witness interviews, the special counsel confirmed that the Russian government sponsored efforts to illegally interfere with the 2016 presidential election but did not find that the Trump campaign or other Americans colluded in those efforts," Barr said.

The other key issue in the report is obstruction of justice. Barr said Robert Mueller's team looked at 10 separate incidents where President Trump might have violated the law. But the attorney general appeared to give the president a pass for some of his questionable and critical comments about the special counsel's investigation.

"President Trump faced an unprecedented situation. ... There is substantial evidence to show that the president was frustrated and angered by a sincere belief that the investigation was undermining his presidency, propelled by his political opponents, and fueled by illegal leaks," Barr said.

During the press conference Thursday, Barr also said his department spoke directly with the White House over the past few weeks. He said the administration was able to review an early version of the redacted report. Barr said that step was consistent with longstanding DOJ procedure, but some people criticized that decision. Giving the White House a heads-up introduces the idea that Barr might have been trying to help the administration spin the report's findings.

Congressional Democrats criticized Barr's handling of the report in a statement Thursday, saying his actions "resulted in a crisis of confidence in his independence and impartiality." House Judiciary Committee Chairman Rep. Jerry Nadler said he's asked Mueller to testify before his committee by May 23. Rep. Adam Schiff, who chairs the House Intelligence Committee, also invited Mueller to testify next month.