Barr May Not Publicly Release Mueller Report If Confirmed 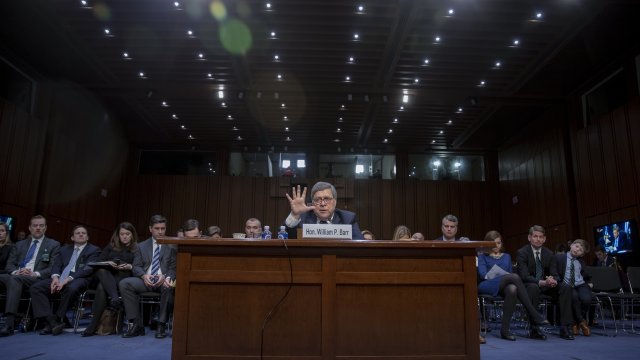 SMS
Barr May Not Publicly Release Mueller Report If Confirmed
By Alexandra Miller
By Alexandra Miller
January 16, 2019
If he becomes the next AG, William Barr may not release Robert Mueller's report to the public. History tell us that's not out of the ordinary.
SHOW TRANSCRIPT

Attorney general nominee Bill Barr has assured Democrats in Congress that if he's confirmed, special counsel Robert Mueller's investigation will be protected and funded. Democrats are still in the dark about what will happen with the report detailing the investigations findings.

That decision would basically be all in Barr's hands. He could choose whether or not Congress and the American people get the full report, a redacted report or just a summary. That summary could be as short as as a paragraph.

"Under the current regulations, the special counsel report is confidential, and the report that goes public would be a report by the attorney general," said attorney general nominee Bill Barr.

The only promise he did make was that if the report were made public, he wouldn't allow the Trump administration to alter it before its release.

Otherwise, he wouldn't commit to much. Sen. Dianne Feinstein, the ranking member on the judiciary committee, was concerned Wednesday with what she heard from the nominee.

"Mr. Barr was clear that he would notify Congress if he disagrees with Mr. Mueller, which I'm grateful for, but his answers on providing a report to Congress at the end of the special counsel's investigation were confusing. When I first asked him about the report, he said he would make it available. However, it seemed to me that as the day progressed, he referenced writing his own report and treating the Mueller report as confidential," she explained.

Republican Sen. John Kennedy agreed, telling Barr: "I would strongly encourage you to put this all to rest — to make a final report public and let everybody draw their own conclusions so we can move on."

This wouldn't be the first time an attorney general has been put in this position. Twenty years ago, the House of Representatives received a 445-page report and 18 boxes of supporting evidence on President Bill Clinton and his potential impeachable offenses. We now know it as the Starr Report. Members of Congress got a 25-page summary plus hundreds of pages of evidence that were also made public.

Democrats are asking Barr to follow the same precedent if he's confirmed, but it's not clear he'd do so. He's got another moment in history to back him up if he chooses not to: The "Road Map," written by Watergate special counsel Leon Jaworski, was sealed for nearly 45 years.

It's unlikely Barr will make any specific promises to members of Congress and will give himself plenty of wiggle room to make his decision based on what Mueller eventually finds.