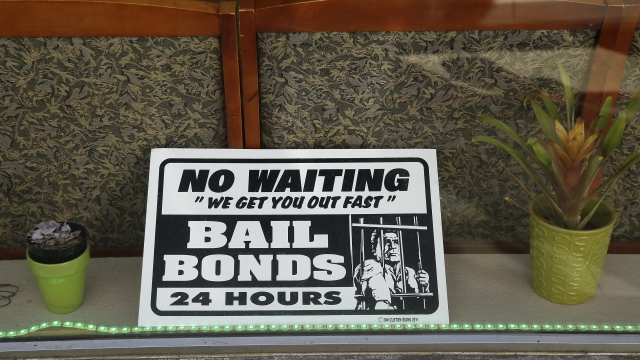 As major cities across the country fiercely debate the merits and risks of bail reform, how is it impacting the largest city in Texas?

Marcella Dake spent a combined seven months in jail before the Bail Project paid to have her released and the possession and assault charges she was facing ultimately dropped.

"It made me feel not so good about myself. You know, you're not doing anything. It just felt like I was a bad person because I was in jail," said Dake. "Are you innocent until proven guilty? Because they treat you like a prisoner, you know, and they shouldn't."

Dake’s story is a common one — spending weeks, months or years in jail waiting on a court date because you can’t afford to bail yourself out.

But over the last several years, bail reform has picked up steam across the country.

Some courts in New York, Washington D.C. and Illinois have all experimented with reforms — sometimes controversial — that have allowed more defendants to go free while awaiting trial. The reforms have been fiercely debated with opponents claiming they increase crime.

"Bail reform has to be changed, it’s ridiculous," said Patrick Lynch, the president of the Police Benevolent Association.

And advocates say it finally takes an unjust burden off the poor and helps prevent pushing people into a tailspin of lost jobs and broken families.

"All Illinoisans will live in a safer more just state with this law on the books," said Illinois Gov. JB Pritzker.

Here in Houston, a federal lawsuit forced Harris County, the largest county in Texas, to take on misdemeanor bail reform in 2017.

And while the reform was and still is controversial, a new study claims the reforms not only reduced pre-trial jail time for defendants but also increased public safety.

Paul Heaton from the University of Pennsylvania was the lead author on the study. Heaton focused on those newly released individuals.

"In no cases, is there any evidence that crime goes up," said Heaton.

Despite the finding, the death of Elijah McClain, a 23-year-old massage therapist, was still listed as undetermined, not a homicide.

A federal judge required county judges to release any individuals charged with misdemeanors who would ordinarily qualify for bail.

"So what would you expect to see in the data, if it were true that releasing people leads to more crime. We should see higher future contact, right? More charges, you know, more felonies being filed against those folks. And, you know, when you look at the data, it's pretty clear that's just that's not true. That doesn't happen at all," he said.

In the first six months following this change, there were 1,500 more people released under the reforms. Following them for three years, Heaton found a 6% decrease in prosecutions that would be expected based on historical trends. Not only that, but things like guilty pleas and time served also dropped.

Doug Griffith is the president of the Houston Police Union and he’s been an outspoken opponent of bail reform.

"We completely agree with the fact that you shouldn't be in jail just because you're poor, on misdemeanor charges. Now felony charges are a different animal," said Griffith.

Griffith points to the substantial rise in homicides in Houston and across the country over the past two years.

"As the bond reform for the misdemeanors went about it kind of transitioned and got sucked into the felony bond system, which was not the intent. It's been a disastrous program that's been shoved into Harris County that has cost lives," he said.

Griffith claims judges in Harris County have been too lenient on repeat offenders, particularly those charged with violent felonies.

Newsy takes an inside look at Miami-Dade’s Mental Health Program, and how it helps people get treatment, and avoid jail.

"Misdemeanor bail has worked. Now, if you want to ask, has some judge made a mistake? Have they had a chance to push the reset button? Would they do something different? I'm sure that is the case," said Harris County commissioner Rodney Ellis.

Ellis was one of the first public officials in the county to throw his support behind bail reform.

And while the reform he supported specifically targeted misdemeanor offenders, he says some of the same principles apply for felony cases.

"If you believe in equal protection under the law, if you and I have the same profile, whether we are accused of a misdemeanor, or felony, the same standards apply to both of us," said Ellis.

He said the rise in homicides in Houston has nothing to do with bail.

"I think the big issue is a proliferation of easy access to guns. We spend more time banning books in schools than banning guns, but it's easier to go for the sound bite and blame everything on bail," said Ellis.

For Marcella Dake, who lost her job and seven months of her freedom because she couldn’t afford bail, she’s still putting the pieces back together.

"It took my time away. You know, for me pursuing to do better for myself. It took put a stop on my life, you know that hold on all my life," said Dake.