It's Not In Your Head — Psychedelics Are Making A Scientific Comeback 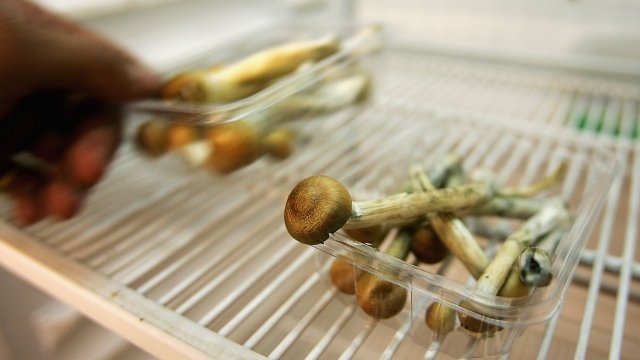 By 1970, psychedelics had a bad reputation for being part of the counterculture. But now we could see them make a comeback.

No, you're not hallucinating. Psychedelics are back.

Not the 1960's hippy-dippy, mind-expanding, anything-goes Age of Aquarius psychedelics.

This time it's all scientific. New medical research points to promising treatment for psychiatric disorders, including depression — a disease the World Health Organization declared the leading cause of ill health worldwide.

More than 300 million people live with it, an increase of more than 18 percent in 10 years. In a way, psychedelics are going back to the future, before the '60s ever sullied the name.

Trump Wants The Terminally Ill To Have Access To Experimental Drugs

There are three names to know if you want to understand psychedelics:

— Albert Hofmann, a Swiss pharmaceutical chemist who created LSD in 1938.

— Dr. Humphry Osmond, an English psychiatrist who coined the term "psychedelic," which actually means "mind-manifesting," in 1957.

— Then, Dr. Timothy Leary, who started the Harvard Psilocybin Project in 1960 to study the effects of psilocybin, the active ingredient found in magic mushrooms. He was fired for giving students psychedelics in 1962, but he did go on to become an evangelist for the drugs.

Between 1953 and the early 1970's, the federal government, with taxpayer money, spent $4 million to pay for 116 studies of LSD and psilocybin involving more than 1,700 subjects.

The psychedelics were tested on people living with psychiatric disorders ranging from alcoholism to schizophrenia. The results were mostly positive and promising. They called for more research.

But that came to a screeching halt. Psychedelics, especially LSD, developed a certain reputation as a counterculture drug. And President Nixon signed the Controlled Substances Act in 1970, which prohibited the use for most any purpose — including research of these drugs. Much of what had been learned faded from psychiatry.

Now the FDA is clearing the way for new research under close supervision. There are trials for LSD, psilocybin, MDMA (aka ecstasy) and ayahuasca, a South American brew containing a hallucinogen known as DMT.

Preliminary results are encouraging. Once again, the drugs appear to help with eating disorders, OCD and major depression, even in cases that didn't respond to traditional meds like Prozac.

How do psychedelics work? That's always a question. Well, think of your brain as a switchboard where the wires have been plugged in forever, and they never got a refresh. This changes that. Some of them might not even be working at this point. Psychedelics disconnect the wires, and give the switchboard — the brain — a break. Then the wires are reconnected, but in a different order that refreshes everything and gets it flowing.

The Verge reports that after a treatment, brain scans show there's more connectivity and integration in the brain, "suggesting that maybe psychedelics work by breaking down the old pattern and kickstarting the brain into a new one."

Brains might be getting a jumpstart in clinical trials, but national drug laws would need a hard reset before everyday patients could pursue this new-wave, old-school treatment.