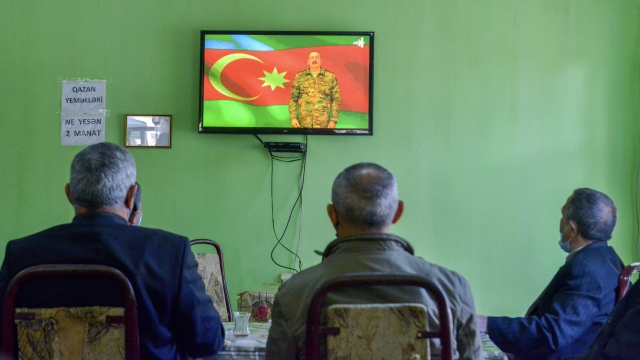 SMS
Azerbaijan Claims It Has Taken Control Of Key Nagorno-Karabakh City
By LeeAnne Lowry
By LeeAnne Lowry
November 8, 2020
But Armenia says fighting over Shusha continues — the latest in a decades-long dispute between the two countries.
SHOW TRANSCRIPT

Azerbaijani President Ilham Aliyev says his country's forces have taken control of the city Shusha in Nagorno-Karabakh. In a televised address, he said: "Shusha is ours — Karabakh is ours."

But Armenian officials say the city, which is the second-largest in Nagorno-Karabakh, hasn't been captured and that fighting continues. Conflicting messages from each side has been a pattern in recent conflicts.

Shusha — known as Shushi by Armenians — is strategically important because of its high elevation, its close proximity to the region's capital and its location on a main road.

The separatist enclave Nagorno-Karabakh has been the center of a decades-long dispute, and fighting has escalated recently. The territory is in Azerbaijan but occupied by Armenians.

Hundreds, if not thousands, have died over it since October. Armenia says Azerbaijan kicked off the fighting by launching missiles, while Azerbaijan says Armenia started the conflict by shelling civilian areas.