Ariz. Mother Deported As Trump Cracks Down On Illegal Immigration 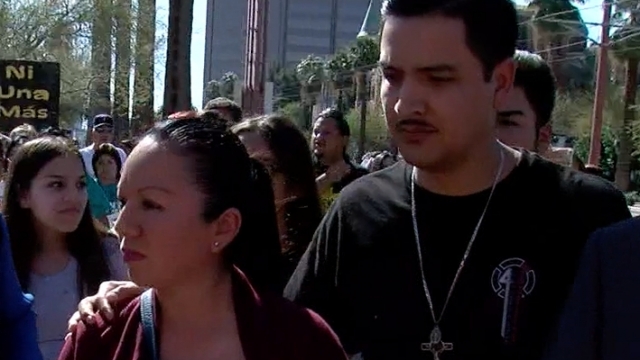 Guadalupe García de Rayos was convicted of a non-violent felony. Groups have argued the workplace raid that led to her arrest was unconstitutional.

The detainment of a mother in Arizona sparked protests that led to seven arrests Wednesday night.

That mother, Guadalupe García de Rayos, has since been deported to Mexico, according to Newsy's partners at KNXV.

Her attorney and protesters say she's one of the first — if not the first — person to be deported under President Trump's executive order. In part, the order calls for the removal of people whose "legal claims to remain in the United States have been lawfully rejected."

Immigration and Customs Enforcement held Rayos when she went to do her regular check-in with them at their Phoenix headquarters Wednesday.

Rayos came to the U.S. illegally when she was 14. She is a convicted felon, having taken a plea deal for using a fake Social Security number to try to get work. That deal included deporting herself. She was arrested and charged following a workplace raid ordered by Maricopa County Sheriff Joe Arpaio in 2008.

Even though Arpaio's raids were later blocked by a federal judge, she lost her deportation appeal.

The number of "sanctuaries" is increasing, even though President Trump signed an executive order to cut their funding.

The Arizona Republic reported in June 2016 an appeals court that previously overturned the lower court's decision to block the raids wouldn't review its ruling.

She wasn't considered a priority for deportation under the Obama administration since she was a non-violent offender.

Rayos has two children who are U.S. citizens. Her husband, who is currently in the U.S., is also an undocumented immigrant.

Rayos' attorney, Ray Ybarra Maldonado, told KNXV on Wednesday he was trying to get a stay on the order.

He said, "They should have good cause and reason to stay and remain in the country. We base that off of our two U.S. citizen children, the fact that she is a victim of one of Arpaio's raids."