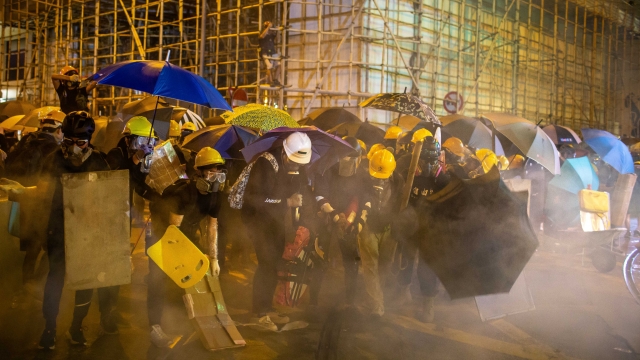 The 44 anti-government protesters were charged in connection with Sunday's demonstrations.

Police and protesters clashed that day after protesters left their authorized demonstration area to march through the streets for the eighth consecutive weekend. Officers dressed in full riot gear fired rubber bullets and tear gas after some demonstrators charged police lines and threw bricks at authorities.

In Hong Kong, rioting charges carry a maximum of 10 years in prison if the defendant is found guilty.

This is the first time officials have pressed rioting charges against any protesters since large-scale demonstrations began in Hong Kong months ago. The youngest person charged is 16 years old.

Demonstrators have been protesting for weeks over a now-suspended extradition bill, which would have allowed China to extradite suspects from Hong Kong.

Although leader Carrie Lam has said the bill "is dead," critics still want it to be formally withdrawn to prevent the bill from being fast tracked through the legislative process in the future. Protesters are also calling for Lam to step down, an independent investigation into allegations that police have used excessive force on demonstrators and democratic reforms.

Almost all of the 44 people charged with rioting were released on bail Wednesday, though one protester did not appear in court and the magistrate issued a warrant for her arrest.