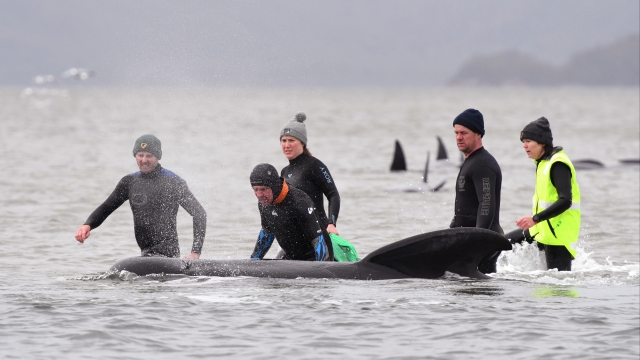 Australian officials have rescued 88 long-finned pilot whales and they're preparing to dispose of 380 carcasses that were found in the country's worst mass beaching event.

Nearly an entire pod of almost 500 whales were discovered on Monday and Wednesday beached on the shore and sandbars along the remote west coast of Tasmania.

Many of the rescued whales have reached deeper water. The Tasmania Parks and Wildlife Service said rescuers are trying to save about 20 others that have survived four days after the stranding. However, four exhausted whales had to be euthanized because they where past the point of saving and it could've taken weeks for them to die. The wildlife service said the rescuers are feeling the emotional and physical tolls.

As of Thursday, crews started preparing to remove the hundreds of decomposing carcasses and take them out to sea. A wildlife biologist with the Marine Conservation Program said they'll start on Friday, and it's probably going to take days to remove all of them.

It's unclear why the whales were stranded so far along the shore, but some researchers think that maybe the pod followed a few whales who were sick or made a navigational error.