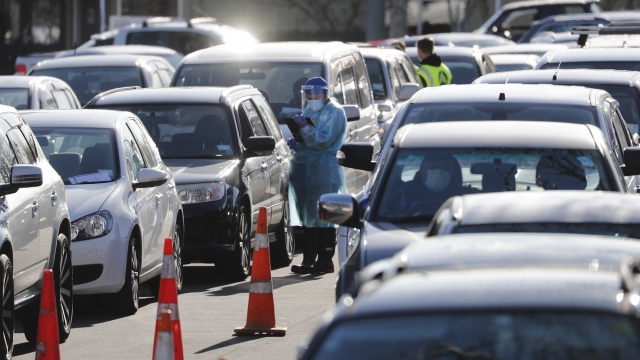 SMS
Auckland, New Zealand, Under Lockdown After Months Without New Cases
By LeeAnne Lowry
By LeeAnne Lowry
August 13, 2020
New Zealand was praised for its success in suppressing the virus, but now it's dealing with a new batch of local cases.
SHOW TRANSCRIPT

New Zealand went more than 100 days without any new local cases of COVID-19. But after four members in one family tested positive Wednesday, the prime minister locked down the country's most populous city.

Within a day, Auckland counted 13 new cases. All of them were linked to those first four.

Prime Minister Jacinda Ardern shut down much of the city — including restaurants, bars, schools and businesses — through at least Friday.

The country's director-general of health said the health system is well-prepared.

"We have been saying for some weeks it was inevitable that New Zealand would get another case of community transmission. This is a tricky virus. We have been working on the basis that it could be at any time and been preparing for that time. That time is now."

New Zealand has received praise for suppressing the coronavirus. Johns Hopkins University reports it's had a little more than 1,500 cases and 22 deaths.

So how did New Zealand — Auckland in particular — go so quickly from a coronavirus-less utopia to a city under lockdown? The New York Times says one theory is — since some of the new infections were among workers at a cold storage warehouse — it could have come overseas through cargo.