What You Should Know About Barr's Testimony To Senate Panel 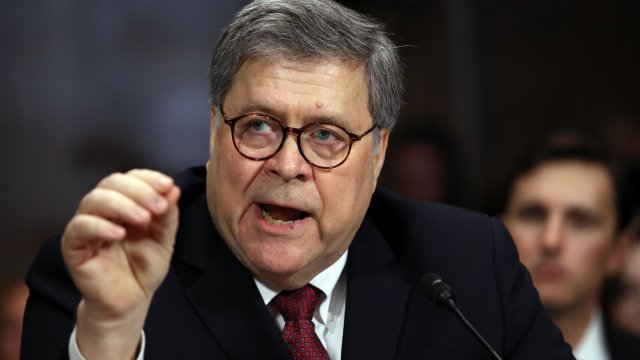 Attorney General William Barr testified before the Senate Judiciary Committee about the Mueller report Wednesday. Now, some Democrats are calling on him to step down.

His testimony began just minutes after the Justice Department released a letter Robert Mueller sent to Barr in March. In the letter, Mueller complained about Barr's memo to Congress, which some critics say was biased in President Donald Trump's favor. Specifically, Mueller said Barr's memo did not fully capture "the context, nature, and substance" of his investigation and caused public confusion. Barr has said he gave Mueller the opportunity to review the memo, but that Mueller declined.

During his testimony Wednesday, Barr said his memo did not exonerate President Trump and that it's up to the people to form their own opinions based on Mueller's report.

Barr's memo also said President Trump "fully cooperated" with the investigation, while Mueller's report said he didn't. Barr said in his testimony that if an investigation is based on false allegations, the president does not "have to sit there" and "allow it to run its course."

"That's important, because most of the obstruction claims that are being made here, or episodes, do involve the exercise of the president's constitutional authority, and we now know that he was being falsely accused," Barr said.

Sen. Richard Blumenthal asked Barr about President Trump's interactions with former White House counsel Don McGahn. The Mueller report said President Trump ordered McGahn to have the special counsel fired. Blumenthal asked Barr if the president lied to the American people, and Barr responded: "I'm not in the business of determining when lies are told to the American people. I'm in the business of determining whether a crime has been committed."

Near the end of his testimony, the committee asked Barr if he would be OK with Mueller testifying, and Barr said yes.

Several 2020 Democratic presidential candidates have called on Barr to resign, including Sens. Elizabeth Warren and Kamala Harris. They said they're disappointed with how Barr handled Mueller's report. Sen. Mazie Hirono also said he should step down and accused Barr of lying to Congress.

House Judiciary Committee Chairman Jerry Nadler said: "I think he's going to have to answer for apparently testifying untruthfully in both the Senate and the House, and that's certainly one option."

In a not-too-surprising turn of events, multiple outlets report Barr will not testify before the House Judiciary Committee on Thursday, even though he was scheduled to. Those reports come after a back-and-forth between the House committee and the DOJ about whether Barr should have to answer questions from an outside lawyer.