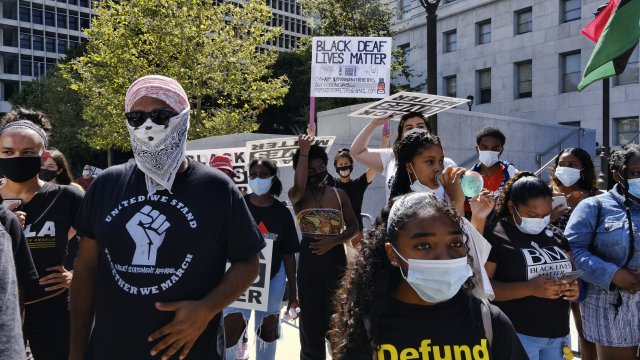 SMS
Woman Charged With Attempted Murder After Driving Through Protest
By Alex Arger
By Alex Arger
September 27, 2020
Two people in a crowd of President Trump supporters were hurt in California and the suspect was identified as part of the "Caravan for Justice" group.
SHOW TRANSCRIPT

A woman has been charged with attempted murder and assault with a deadly weapon after driving through supporters of President Trump in California on Saturday.

Tatiana Turner drove through a group, many waving Trump flags, after a dispersal order was given. The incident injured two people, with one suffering two broken legs and the other left with major injuries.

Turner was identified as part of the "Caravan for Justice" supporting Black Lives Matter that drew about 250 people to Yorba Linda, 35 miles east of Los Angeles. The Orange County Sheriff's Department declared an unlawful assembly after clashes between Black Lives Matter supporters and Donald Trump supporters began about 30 minutes into the event.

In another incident on Thursday, one person was hospitalized after being hit by a pickup truck during a protest in Hollywood over the death of Breonna Taylor. And at that same event, another vehicle struck protesters after driving through an intersection.

Demonstrations have been ongoing in the Los Angeles area since Wednesday, when a grand jury decided that none of the Louisville officers involved in Taylor's death would be criminally charged with killing her.